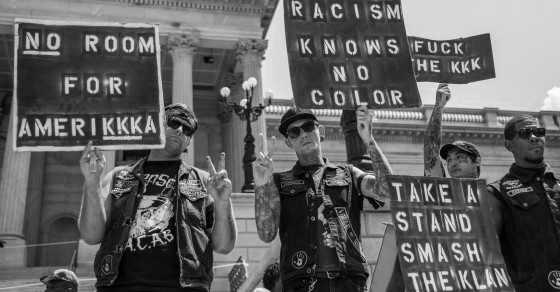 Advocates of gun ownership for marginalized people must talk about one of the biggest threats faced by such groups: hate crimes. Oftentimes, the media confuses this kind of bigotry with mental illness: but bigotry is not a mental illness at all. Truth be told, we all have internalized prejudices that we must attempt to combat. Many of our experiences and attitudes are influenced by our own unique intersections of privilege and oppression. We must begin by deconstructing our own internalized bigotry and helping others to do the same. But we must go further than that if we truly wish to end bigoted violence.

In many instances, gun violence is backed by misguided hatred or fear. This is the case in a number of high profile shootings over the past few years. From Trayvon Martin to Dylan Roof to the Orlando tragedy, the assailants were all motivated by some form of bigotry. This type of violence will not be stopped with mere weapons bans. If violent bigots aren’t able to use guns, they will turn to other things: poison gas, bombs, fists, and other weapons. No — in order to effectively deal with these forms of violence, we must strike at their root causes.

We must educate our children and our community members about the effects of racism, colorism, sexism, transmisogyny, heterosexism, cissexism, Islamophobia, classism, ableism, and other forms of prejudice. This means calling in folks when they make ignorant remarks, holding educational workshops, and being more involved in shaping your child’s education as well as challenging openly racist groups and organizations. This means starting Antifa groups, as well as other anti-fascist organizations and affinity groups. This means challenging the platforms given to those preaching hatred and encouraging others to do the same. This means shutting down fascist and bigoted recruiting efforts before they grow and spread. This means joining in or aiding movements built around combating such violent hatred: Black Lives Matter, the Water Protectors, pro-immigrant groups, queer rights groups, etc. This means opening up our borders and dispelling the myths surrounding immigrants. This means fighting to end the War on Terror and the Islamophobic propaganda continually used as an excuse for this war. This means taking a stand against racist policing practices. This means standing with indigenous people as they fight to preserve their lands and culture in the face of colonialism. This means arming poor and marginalized people so that they have the ability to protect themselves from hateful violence.

Redneck Revolt is a great project in this respect. Not only do they teach marginalized people various forms of self-defense — especially firearms training — but they also engage in various forms of educational outreach in order to combat bigotry. They attend community events, hold workshops on deconstructing white supremacy, and publish and distribute ‘zines on queer politics, the white working class, anti-racism, women’s liberation, classism, and more. Instead of merely staying within typical leftist echo chambers, Redneck Revolt engages with the broader white working class community where they are already at: gun shows, barbeques, races, music festivals, Tea Party rallies, or other community events where they can show solidarity and spread their message even if they are met with some hostility or skepticism. Groups such as Brothas Against Racist Cops and the Huey P. Newton Gun Club serve similar purposes in communities of color while working to combat anti-black racism within the police force and their communities at large. The Pink Pistols and similar groups work to normalize LGBTQ voices in the gun community, thus dispelling harmful myths.

The Bastards Motorcycle Club is another example of thinking outside the box when organizing against racism. Made up of many former members of 1% MCs, they formed their own club which refuses to limit membership based on skin color, sexuality, gender identity, or any other similar factor. While operating as a support club for the all black Outlaw MC 1%, they also are an explicitly anti-fascist group. In between hanging out with other clubs, going on rides, and attending biker events, they attend Black Lives Matter events, heritage rallies, white nationalist rallies, and other protests to confront bigots in their communities. This allows them to lead by example and their reputation in the motorcycle community has led to many discussions on bigotry within biker circles: a community not usually reached by outside anti-racist organizers.

It is important that we educate outside of traditional leftist circles so that we aren’t just preaching to the choir, just as it’s important to challenge any platform given to bigots attempting to spread their hatred. Obviously not everyone who holds bigoted views is necessarily going to act on them in a violent manner. Far from it. Some may even quietly hold onto their beliefs in such a way that most would never even know their true feelings. But just because this can be true does not mean it should be left unchallenged. That being said, it is much more important to challenge a Nazi recruiter than the old man down the street who is unlikely to actually physically hurt anyone. The idea is to contain and eventually eliminate the spread of such harmful ideologies so that they can no longer influence others to harm people in their name. Pick your targets wisely while realizing that we all need varying degrees of education on these issues, even ourselves.