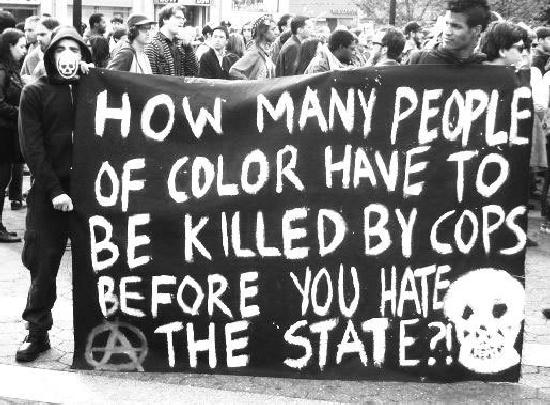 The subject of police — by far one of the biggest issues related to gun violence — is not tackled by modern gun control legislation. We can attempt to keep guns out of the hands of dangerous criminals all we want. But until the state stops providing some of these criminals with special uniforms and weaponry to use against us with little to no consequence, and then puts them in charge of enforcing the state’s (or even their own) will, we will be no closer to solving the problem.

Movements targeting the issues of police militarization and brutality have been gaining a lot of momentum in recent years as easy access to cameras and other tools push their violent practices more explicitly into public view. Black Lives Matter, Copwatch, Cop Block, The Huey P. Newton Gun Club, Black Women’s Defense League, Cato Institute’s National Police Misconduct Reporting Project, Say Her Name, Assata’s Daughters, and many other groups have suggested potential solutions. These solutions range from reformism to radicalism, and they all aim to tackle police violence: most importantly, lethal force involving firearms.

The efficacy of these solutions varies. Some are merely bandaids which arguably slow down the bleeding but fail to heal the wounds in our communities. Examples of such bandaids include community accountability boards, body cameras, and ending practices such as Stop and Frisk, the War on Drugs, the War on Whores, police militarization, and prison privatization. There are even calls to disarm street cops entirely: similar to the situation in countries like England. It might be odd for an essay series explaining why gun control is bad to recommend such a measure —  it is not the panacea by any means — but most of us aren’t allowed to carry firearms on the job for various reasons and with this country’s policing track record, it is probably a good idea to restrict usage of firearms for the police force in general as part of the path towards demilitarization.

However, these are not long-term solutions. Some of these bandaids may even have unintended consequences. But changing a system is messy and we don’t always have the best solutions or tactics in every situation. If we truly wish to tackle the issue of police violence, we must move to abolish the modern police force and replace it with something altogether new. But abolition is a long process and a goal which leaves us with a lot of political enemies, most notably the officers themselves. It is with this in mind that we must hold on to our firearms, train each other in how to use them safely, and protect ourselves, our families, our friends, and our communities from the police and their reactionary supporters. It can be argued that underneath the uniform, “Blue Lives” are no more or less valuable than any other; by that logic, police should be held to the same standards as anyone else and if they commit acts of aggression against innocent people, those people have an ethical claim to self-defense.

Of course, waving a gun at a cop is a surefire way to wind up dead or in prison, but that is not the only way firearms can be used to combat police brutality. Taking a page from the Black Panther Party for Self-Defense, some groups have brought back the practice of community police patrols. During these patrols, armed citizens guard their neighborhoods from police. When cops are seen harassing community members, patrol members have been known to stand nearby with guns visible (in areas where open carry is legal) and yell legal advice while filming the interaction. This kind of display makes an officer less likely to try and start something knowing that they are outgunned and outnumbered in that moment. They might be aware that they can call for backup, but that doesn’t stop the officer from getting shot if things escalate before backup can arrive. Luckily, these types of patrols work through that fear alone and rarely, if ever, turn into a gunfight (I have not discovered any such cases in my research).

America has a long standing tradition of citizens owning firearms to keep the government in check. So in an era where police are shooting people dead in the streets for petty crimes or no crime at all, all while upholding a system of prison slavery, white supremacy, and corporate statism, we should be ready to reclaim this tradition and prepare our communities to fight back as peacefully as possible in such a violent situation. Gun violence will never end as long as police have the power to use firearms against us as they please without much risk of consequences. No gun control regulations will change that fact.