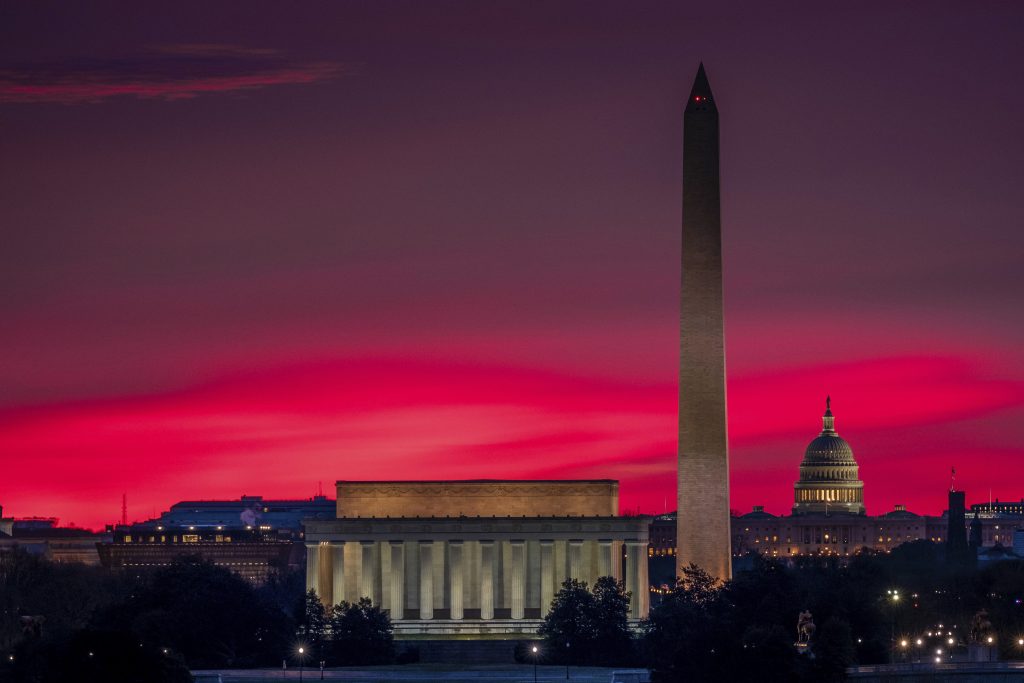 The sunrise behind the skyline of Washington turns the sky red on the first day of daylight saving time in the U.S., Sunday, March 12, 2017. Daylight saving time which officially began at 2 a.m. Sunday pushes the clock forward an hour gaining more evening light in the months ahead. (AP Photo/J. David Ake)

Hi everyone, it’s Sunday, which means it’s time to play catch-up! Here’s what we’ve been doing since January 29.

January ended with three op-eds published by Chad Nelson and Logan Marie Glitterbomb: “Vermin Supreme’s Inauguration was a Riot!” and “Don’t Let Him Build the Wall: A Call to Action,” by Logan and “Hunt Sabotage Accomplishes What Law Cannot,” by Chad.

The first week of February was punctuated by Logan’s reportback from Washington, D.C. where she took part in #DisruptJ20 actions: “Disrupt J20: The Fight Against Fascism and Fake News.” Her article got picked up by It’s Going Down, a popular anarchist site we cite in the Daily Molotov from time to time.

Following Logan’s piece, the Center got pretty quiet on the commentary front, with Kevin Carson’s periodic commentaries holding down the fort for us. On Feb. 10, he published “Milo Is Not the Victim Here,” regarding former Breitbart provocateur Milo Yiannopoulos’ visit to UC Berkeley last month. He followed that with “Can Someone Protect Us From Our ‘Protectors’?” and “Same Colonial Wealth Extraction, Different Name” on February 21.

After a brief publishing lull, our new Social Media Coordinator, Meg Arnold, and SFL Regional Coordinator Cooper Williams sent in their reportback from the International Students for Liberty Conference on February 26: “C4SS at ISFLC.”

To round out February, Roderick Long made his triumphant return with “Stop Banning Muslims, Stop Banning Guns,” a compelling piece that links the reasoning between the two ridiculous policies, on Feb. 27. This piece had quite a bit of reach, hitting the Libertarian Institute’s website and BHL (where Long is a regular blogger, to be clear) as well as several local newspapers’ websites, including the Rio Rancho Observer, the East Oregonian and the Pagosa Daily Post.

March started out strong, with Sheldon Richman’s reposted piece, “Trump Assumes Command of the American Church,” coming out on March 4. Kevin Carson followed that up with a piece on the Oxfam wealth concentration report, “Wealth is Concentrating Too Fast to Keep Up.” A couple of days later, James C. Wilson called on readers to “Decriminalize Immigration, Free Movement for All!” And finally, we’re caught up with Kevin’s latest: “Time to Use Uber’s Weapons – Against Uber.”

I’m also excited to say that we’ve got a new Senior Editor, Daniel Pryor. He has taken over for Chad Nelson, and we’re all very welcome for his addition to the team.

Darian Worden returns with their post, “Time to Decide the Future is Now,” published on Jan. 29. It’s a meditation on how to defeat the authoritarian nationalists currently occupying this nation’s halls of power. In February, Logan Marie Glitterbomb posted the second part of “Combating Hate: A Radical Leftist Guide to Gun Control.” Chris Shaw published two pieces, “The Precariatisation of Work” and “‘Full Employment’ Useful Idiots.” On Feb. 19, Ryan Calhoun emerged like a Chilean miner from the depths and wowed us all with “A Nation of Immigrants, A Nation of Criminals:”

Let’s get to the core of the issue in light of all this. It’s true that undocumented immigrants either entered this country illegally or have overstayed their legally permitted welcome. This is criminal behavior. That much we know. What we don’t know yet from this is how to respond. It’s true that deporting undocumented immigrants is legal. What those who rely on this fact to justify deportation do not acknowledge is that not pursuing those methods is also legal, as is granting them amnesty. What good comes from the first tactic? Assuming it does rid our population of some dangerous individuals, should that really be our standard of justice? Purging criminals from society does not have a good track record of succeeding in freeing us from violent individuals. Rather, it enables them. Also, as stated before, the vast majority of those who criminally enter our country do not go on  to commit crimes.

Let’s all inhale and exhale peacefully for a second as we finish processing all of this fun stuff. Welcome back to regular Media Coordinator updates! And I just want to say, thank you to everyone who supports the Center in months where we’re writing every day as well as months where we… aren’t. It means a lot to every writer and coordinator here.

Reminder! We are a 501(c)3 non-profit organization that relies on your tax-deductible donations to keep rolling along, putting anarchy into the hands of folks all over the world. Be like the generous individuals who have already donated this month or follow us on Twitter at @c4ssdotorg. Say hi to Meg!

Questions? Comments? Concerns? email me at trevor@c4ss.org or tweet at me at @trevor_c4ss.