If you didn’t already hear, Vermin Supreme was recently inaugurated as President of the United States on January 20th, 2017 and the celebrations couldn’t have been more festive. Tens of thousands of people or more showed up to show their support with fireworks, musical performances, cannabis, campfires, and more. But there was another man trying to ruin everyone’s fun by falsely claiming he had won the presidential bid. Vermin Supreme is still confused about why The Donald, whom he claims to have paved the way for, thinks he won but his supporters proved that even the thought of Donald Drumpf becoming president was unacceptable.

On the morning of his inauguration, Black Lives Matter protesters, Water Protectors, and a host of other Vermin supporters showed up to block the entrance of Drumpf’s fake ceremony. Meanwhile Drumpf’s henchman, Alex Jones, paraded around a fake anti-Drumpf protester while claiming that her fellow anti-Drumpf protesters had beaten her up despite being able to offer no proof just like the rest of his claims. Sadly, no one punched him in the face. Although alt-right leader Richard Spencer did get slugged pretty hard at least three times (two of which have been beautifully documented), crying into his Pepe pin; an act that President Supreme wholeheartedly endorsed. Since then, Richard Spencer’s nightmare of becoming a meme has come true. There is even a twitter account dedicated to musical remixes of the video of him getting punched.

At the same time just down the street there was a massive outdoor smoke out in which they passed out over 4,200 hand rolled joints which were sparked up 4 minutes and 20 seconds into Drumpf’s fake inauguration. 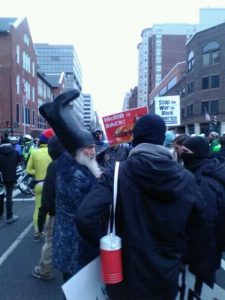 Later that day, president-elect Vermin decided to take to the streets along with his many supporters. As I stood there in front of a line of riot cops, I looked over to see him. He greeted me warmly with open arms, thanked me for attending his inaugural party, and passed me the pipe he had just taken a huge hit off of. After the president-elect, his vice president-elect Matthew Silver, their former debate host Rob Potylo, and I finished getting royally (or should I say presidentially) stoned, the soon-to-be president took to mocking the armed police who dared threaten his rule while being escorted by his volunteer black bloc secret service. 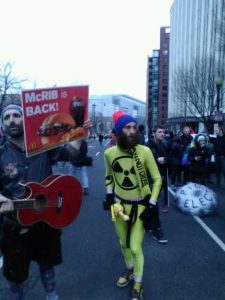 With the crowd passionately cheering, “What do we want? McRibs! When do we want them? Now!” Matthew Silver, myself, and a myriad of others locked arms in front of the police lines to block them from advancing on the peaceful crowd of presidential supporters. But the police refused to listen to the president-elect as they advanced in against his wishes and began to spray the crowd with pepper spray and tear gas. They shot concussion grenades and began beating people with batons as the crowd attempted to disperse. But we regrouped and fought back after they maced a 7 year old Drumpf supporter. Bricks we’re torn up from the sidewalk and thrown at any cop who dared disrespect our soon-to-be president.

Once we drove the pigs out, we regrouped for a nice celebratory campfire. Several trash cans were dragged out into the streets and set ablaze. A friend and I decided to pull up a newspaper machine and sit down. Another newspaper machine was pulled up as others took a seat around the campfire. We warmed our hands, gave each other hugs, sang songs, and one friend even caught up on a little fireside reading, pulling out a T.S. Elliot book from his backpack as he took a seat. 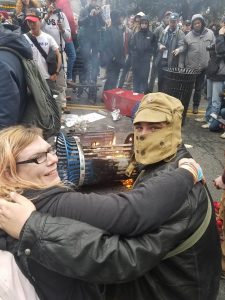 A young Drumpf supporter, upset at both the loss of his preferred presidential candidate and two perfectly good trash cans, attempted to put out our campfire with the last few drops of his juice he had stored in his bag to no avail. Nearly in tears he began begging the crowd for water but we all sat drinking from our bottles, refusing to let him ruin our fun. When another sore loser burst through the crowd and drenched our fire with his fire extinguisher, a man selling Drumpf t-shirts pushed his cart up and offered to help us restart our campfire. After letting me light the first shirt (if anyone can find video of this please pass it on), he threw another on the pile to sustain it and then shouted, “$5 to keep the fire going!” People immediately started handing him money as he chucked as much Drumpf merchandise on the fire as he possibly could. When the sore loser with the extinguisher threatened our fire and our friends with physical violence once more, he was dragged off by the black bloc secret service only to return a few minutes later without his extinguisher, his glasses, or his silly red hat but he did have a shiney new busted eye. Needless to say, his hat burned well.

That evening Vermin Supreme was inaugurated officially as the President of the United States of America in a park nearby as the crowd celebrated their victory over what could have been the worst presidential candidate of all time. Now after three long days of celebration in DC with no access to showers, I’m sure I’m not the only commie here at C4SS that is eagerly awaiting their free stuff, mainly the ponies and the interstate roller coaster system we were all promised. Unlike former President Obama, I have a feeling that President Supreme will be better at keeping his promises.

To quote President Supreme’s campaign song, “Gonna vote for Vermin and end the Matrix, hey! Hot dogs and applesauce! And maybe we’ll get married one day.” 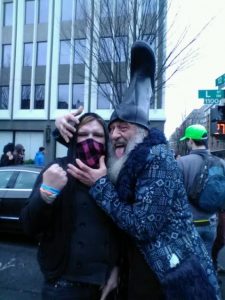