Download: The Decline and Fall of Sloanism [PDF] or the ready for print zine.

I. Babylon is Fallen

In the last C4SS paper, we saw that Sloanist mass production, as a system created by the state, diverted the course of industrial development for a century. In this one, we will see how the unsustainability of the Sloanist model will lead to a resumption of the original decentralist course of development. [1]

If you watch the mainstream cable news networks and news analysis programs, you’ve no doubt seen, many times, talking head commentators rolling their eyes at any proposal for reform that differs too radically from the existing institutional structure of society. That much of a departure would be completely unrealistic, they imply, not only because it is an arrogant imposition on the common sense regular folks who prefer things the way they are, but because “the way things are” is a natural state of affairs that came about by being the most efficient way of doing things.

But in fact the present system is, itself, radical. The corporate economy was created in a few decades as a radical departure from what prevailed before. And it did not come about by natural evolutionary means, or “just happen”; it’s not just “the way things are.” It was imposed from above (as we saw in Chapter One) by a conscious, deliberate, radical social engineering effort, with virtually no meaningful democratic input from below.

All social systems include social reproduction apparatuses, whose purpose is to produce a populace schooled to accept “the way things are” as the only possible world, and the only natural and inevitable way of doing things. So the present system, once established, included a cultural, ideological and educational apparatus (lower and higher education, the media, etc.) run by people with exactly the same ideology and the same managerial class background as those running the large corporations and government agencies.

The system of power can only be undermined by forces beyond its control. Fortunately, it faces a mutually reinforcing and snowballing series of terminal crises which render it unsustainable.

The present system’s enculturation apparatus functions automatically to present it as inevitable, and to suppress any consciousness that “other worlds are possible.” But not only are other worlds possible — the terminal crises of the present system mean that this world, increasingly, is becoming impossible.

1. This paper continues where C4SS Paper No. 3 (“Moloch: Mass-Production Industry as a Statist Construct” <http://c4ss.org/wp-content/uploads/2009/08/moloch.pdf>) left off. Both are developments of themes stated, more briefly, in C4SS Paper No. 1 (“Industrial Policy: New Wine in Old Bottles” <http://c4ss.org/wp-content/uploads/2009/01/industrialpolicycarson0109.pdf>).

Download: The Decline and Fall of Sloanism [PDF] or the ready for print zine. 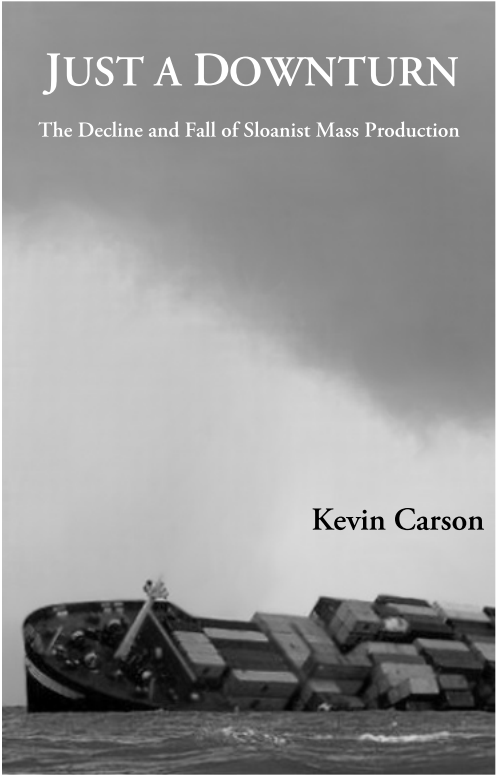 Citations to this article: