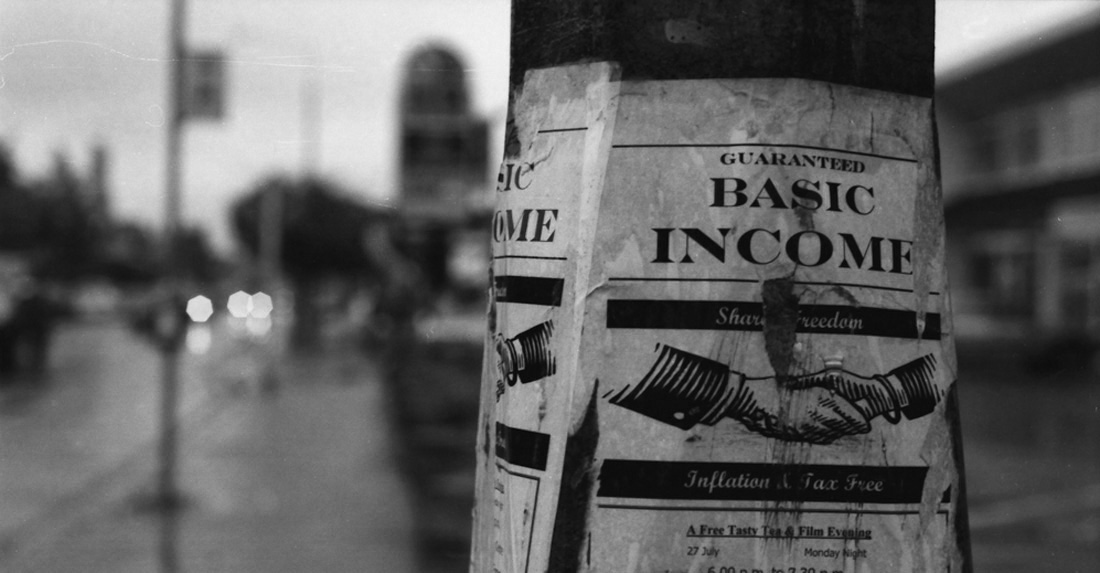 Given increasingly prominent calls for a Universal Basic Income (UBI), it is worth considering the extent to which such proposals accord with the principles of freedom and justice. UBI divides opinions and elicits controversy from across the political spectrum because it seems to be both idealistic and fatally flawed. This author was once a staunch opponent of UBI, but has since grown to believe that it is compatible with economic, social and political freedom.

Freedom from the Labour Market

Whilst we agree that workers should have the freedom to set their own wages — to bargain, negotiate, take up and leave jobs etc. — there is less discussion of how workers should be free from labour markets. Alongside freedom to work, freedom from the labour market is an important consideration. Why should we be forced to participate in the labour market just to survive? Why should we be coerced into the elite-serving, surplus value-extracting rat race? There is extremely valuable ‘work’ and ‘labour’ to be done beyond that which is ordinarily compensated in the labour market. Of course, some critics may say that nobody is forcing us to live in society but, practically speaking, we are born into it, we are bound to it, and it is exceedingly difficult to live without it.

In this sense, I agree with Chris Shaw’s recent piece on C4SS:

“…the idea that [UBI] is simply money for nothing is a perfect example of the kind of vulgar libertarianism that infects modern discourse, where such a person is confused as to whether we live in a free or rigged market… UBI would be one step toward freeing workers and the entrepreneurial spirits of a huge range of individuals, allowing for the creation of a market freed from state coercion and control.”

Against ‘Division of Labour’ and Forced Specialisation

Whether you align yourself with the views of Karl Marx or Adam Smith, one cannot deny that a ubiquitous feature of contemporary mixed economies is the division of labour and subsequent specialisation. Across various societies, people are incentivised (and essentially forced) to spend the most significant proportion of their time producing particular goods and services in order to survive.

If we do not specialise and become a mechanistic part of the production process (in which we are subsequently expected to excel), it is likely that our financial compensation will be diminished relative to our peers (though there will always be some exceptions). With a UBI, there would be no need for people to specialise. Therefore, there would be a significant reduction in what Marx called “alienation.”

Currently, many people cannot devote energy to developing products and services in an entrepreneurial capacity because they are shackled to a full-time job. They must earn an income if they wish to survive or maintain a particular lifestyle. This expenditure of mental and/or physical energy suppresses our capacity for creative thought. A basic income would allow people to engage in entrepreneurial activities with a firm safety net, which would allow them to work in a less stressful environment.

Detractors argue that a UBI could not be adequately funded. On a standard economic world view, the four factors of production are land, capital, entrepreneurship, and labour. Although the other three factors of production would need to be freed with separate measures, UBI opens the floodgates of entrepreneurship, which is an essential tool for raising incomes. This rise in income would further fund the UBI, thereby perpetuating a self-reinforcing cycle: lifting people out of poverty and continuously raising living standards.

Furthermore, innovation is driven by knowledge-generation, knowledge-advancement, and knowledge-application. Currently, a significant amount of influential research takes place in institutions of higher education and research departments of big businesses. These institutions are the only ones that can afford to fund these inherently risky activities. An ordinary person cannot devote all their efforts to intellectual discovery — either for its own sake or for the sake of its potential applications — because they usually need to earn a living.

Indeed, even within the confines of the institutions that encourage research and development, only ‘impactful’ research that brings in more grants and funding will be rewarded with tenure, promotions or otherwise. This incentive structure means that even the intellectual autonomy of dedicated research institutions is constrained. Our capacity for intellectual discovery is therefore limited by a plurality of oligarchic knowledge-elites. UBI would enable anyone – regardless of their institutional affiliation – to more effectively advance the frontiers of human knowledge.

Challenging the Entrenched Privilege of the ‘Family Unit’ in Society

Although this may seem like an argument to ‘abolish’ the family, I am not making the same suggestion that Plato and/or Socrates did in The Republic; their conception of ideal social organization requires no ‘families’ or ‘familial ties and allegiances’, with people instead owing their sole allegiance to society.

What I am arguing is that unlike a means-tested system aimed only at ‘the poor’, UBI would erode the division between poor and rich individuals: not just inequalities between families. After all, someone who lives within a rich household may not be entirely content with their financial dependence on other members of that household.

The allegiance to the ‘family unit’ within society is artificially reinforced through various institutions (such as marriage law, bionormativity, and more) that seek to privilege and/or ‘uplift’ families with particular qualities. UBI would give every individual a greater degree of freedom to live within or without a family.  An individual’s freedoms, roles, and contributions within society would no longer be intrinsically tied to their familial background, which is an arbitrary, biologically-based accident of circumstance rather than an originally free choice.

A Voluntary UBI Is the Ideal Solution

The fundamental problem with UBI proposals in their current form is that it would be taxpayer-funded and therefore rooted in coercion. On this subject, Ryan Calhoun criticized the UBI in 2014 for C4SS; his article was entitled “The UBI: Another Tool for Disciplining the Poor.”

Although it’s worth noting that all contemporary, publicly-funded services have coercive origins, a voluntarily-funded UBI would obviously be ideal. Ensuring that a voluntary UBI utilized suitable mechanisms for delivering and enhancing trust is an unenviable but profoundly important challenge. Even if this can be accomplished, the difficult task of convincing people to adopt these mechanisms remains.

Whether one likes it or not, UBI is undeniably gaining popularity in many circles – especially on the Left but also amongst the Right. A friend of this author also recommended that I examine the left-libertarian argument from Philippe van Parijs in Real Freedom for All (though I never got round to it), since he said he was not convinced by the arguments for the UBI until he had read that.

In any case, we must re-examine the potential outcomes for UBI and its theoretical basis: both of which will be the subject of heated debates. But we must also investigate how a Universal Basic Income fits into our own understanding of freedom. Is there a universal, timeless, and rigid definition of freedom with which UBI must inevitably clash? Or are there regularly neglected (though vital) aspects of freedom that a Universal Basic Income seeks to address — the ramifications of which frighten many for their radically transformative potential? I am of the opinion that the latter is true.