The Bootleggers & Baptists allegory is a helpful illustration for understanding the motivations of actors within a regulated industry. Popularized by economist Bruce Yandel, it helps to explain how two seemingly unaligned groups can come together to support the same policy prescription — when they both stand to benefit from the outcomes.

It goes like this. Christian conservatives were successful, and in some areas remain successful to this day, in pushing for laws that prohibit the sale of alcohol on Sundays. They did so for moral reasons, arguing that sobriety, especially on the Sabbath, was of particular moral concern. The bootleggers, who enjoyed more business on the days when the above-ground market was closed, had considerable incentive to work with the prohibitionists (Baptists) in preserving this black market, however temporary. The baptists claimed the moral high ground openly while the black market dealers profited behind closed doors.

This framework allows us to understand why, in the last few years, an alliance has emerged between TERFs and Christian conservatives. TERFs are trans-exclusionary “radical” “feminists.” I use scare quotes because I believe them to be neither radical nor feminist. Adhering to debunked notions of biological essentialism is not radical, but rather reactionary, and defining women as essentially walking incubators is distinctly anti-feminist.

A few years ago, a colleague forwarded me an invitation for an event hosted by the conservative Heritage Foundation titled “Biology Is Not Bigotry.” This event was billed explicitly to showcase an unlikely alliance between these self-described “radical feminists” and Christian conservatives against the growing acceptance of transgender individuals. Events like this have been replicated around the world and show that this alliance is not unique to the US. In most cases they include out lesbians who argue that the mere existence of trans women in space and time is a violation of their privacy, and even their identity.

This was definitely the case at the Heritage Foundation event. If you’ve ever interacted with TERFs you have probably seen the language they use to co-opt the language of privacy rights into a cudgel used to demean and exclude trans people (though almost exclusively trans women) from public life. For what it’s worth, the argument that coexisting with trans people is a violation of cis people’s privacy has been rejected by courts across the country.

At the Heritage event they spoke of North Carolina’s controversial and illegal “bathroom bill” as a “privacy law.” This bill, HB2, would make it illegal for anyone to use a bathroom that didn’t correspond to the gender marker on that individual’s originally issued birth certificate. It shouldn’t shock the reader to suggest that Christian conservatives don’t have a history as staunch defenders of the rights of lesbians or other gender and sexual minorities, or even that of privacy rights. So why are they working with “radical” feminists concerned about “privacy rights”? Just like in the tale of the bootleggers and baptists — there’s more to this alliance than meets the eye.

Heritage has routinely come down on the side of the federal government when it comes to issues like dragnet surveillance and has staked out an antagonistic view with regards to Lawrence v. Texas, the Supreme Court case that overturned Texas’ ban on sodomy, decrying it as a case of judicial activism. Heritage has routinely come to the defense of the Foreign Intelligence Surveillance Amendments Act of 2008 which created much of the legal infrastructure for the NSA spying complex that Edward Snowden blew the whistle on in 2013.

It seems that Christian conservatives are fine recognizing an unenumerated right to privacy when it means barring trans people from public bathrooms or regulating the conduct of consenting adults in the privacy of their own bedrooms, but not when it comes to the ability of the people to be free from warrantless surveillance. 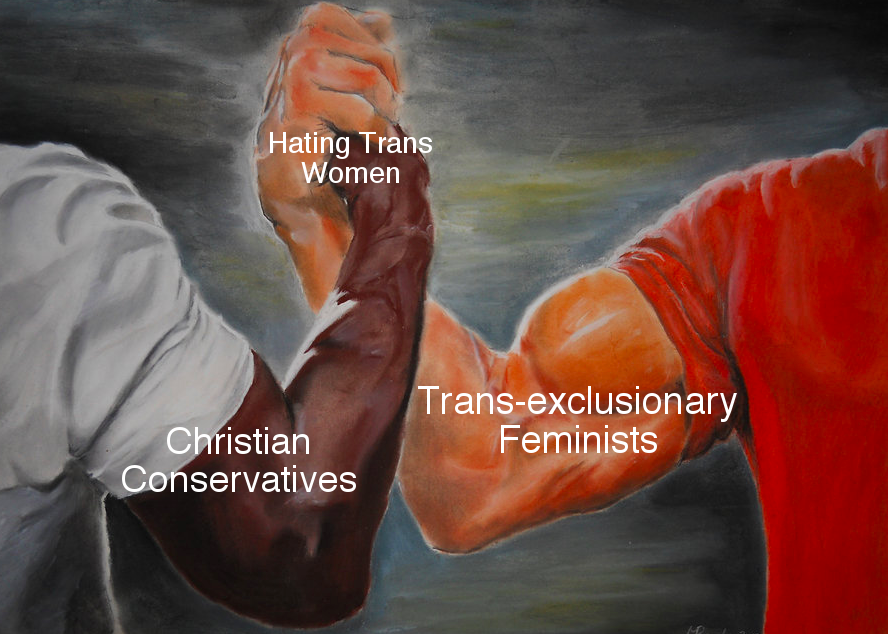 All of this is to say that, unsurprisingly, that Christian conservatives have a selective interpretation of what constitutes privacy, or even liberty for that matter. And they are willing to set aside their very apparent disdain for gay people, feminists, and feminism if it means they can target trans people for further marginalization.

To that end they find what, at first glance, seems like an unlikely ally in the form of self-avowed “radical feminists” like those in attendance on Heritage’s panel.

Another point to make here is that very often throughout history biology has in fact been used to justify bigoted beliefs. Misogynists referred to brain size for decades in order to justify denying suffrage to women and appeals to skull shape and physicality were cited to justify chattel slavery. The claim that “biology is not bigotry” is actually pretty easily debunked with even a cursory understanding of history. Conservatives have been resorting to the naturalistic fallacy since practically the beginning of time to stand athwart advances in social progress. They did it to deny same-sex couples the freedom to marry, and they’re doing it today to deny trans people access to bathrooms.

The Bootlegger & Baptists analogy carries over beyond Christian conservatives playing the role of the Baptists. I see TERFism as a form of half-baked, “bootleg” feminism. This strain of feminism finds its roots primarily in second-wave feminism which originated more or less alongside the Civil Rights era and the Sexual Revolution that saw greater visibility and progress for feminism and the Gay Rights movement. Almost as soon as the Gay Rights movement began, around the time of the Stonewall Riots in 1969, divisions sown by intragroup respectability politics emerged between the lesbian, gay, and bisexual communities and the transgender community.

It is from this period of time — and the blending of gay rights and feminism — that many TERFs draw their ideological influences. 1979 saw the publication of the seminal text of trans-exclusionary feminism, Janice Raymond’s The Transexual Empire: The Making of the She-Male. This era also saw the formation of lesbian separatist groups that emphasized biological distinctions between men and women as the crux of gender-based oppression. Groups like the notoriously trans (women) exclusionary Michigan Womyn’s Music Festival, which was first established in 1976, grew to prominence. The festival was billed exclusively as a space for “womyn-born womyn.” Anti-sex work feminists also date back to around this era. The venn-diagram of trans-exclusionary and sex worker-exclusionary feminists is very close to a perfect circle.

Recently at a LGBTQ+ Pride march in London, England, a handful of TERFs hijacked the lead contingency in the Pride parade with signs and slogans that implied that the very existence of trans women “erases lesbians.” TERFs seem to believe that queer liberation (to the extent that they even advocate queer liberation) is a fixed or zero-sum situation. Many TERFs, though by no means all, are in fact lesbians who feel that trans women pose an existential threat in the sense that trans women will take up resources or space meant for cisgender women, be they gay or straight.

You can see this on display at London Pride earlier this year, or at the notorious “Michfest,” the now infamous and defunct gathering of lesbians and queer women in Michigan that was billed as exclusively for “genetic” women. I believe it is this misguided fixed-sum view of womanhood and feminism that brings many TERFs to align with Christian conservatives. Christian conservatives get their win in the form of legislating their religious beliefs with respect to gender and sexuality, and TERFs get to further monopolize the limited resources and spaces that are available for women.

From the perspective of the radical feminists, growing societal acceptance for trans women is a direct threat to progress made for cis women in the sense that if trans women are using women’s locker rooms or have access to shelters for battered women then, to them, that means that they necessarily exclude “real” women from those very spaces. Nevermind that trans women as a demographic face disproportionate rates of violence due to a sinister blending of transphobia and misogyny (transmisogyny). As this article was being written, the number of trans women murdered so far in 2018 rose to 19 as of early September. That puts 2018 on track to be the deadliest year for trans women.
I want to stress that people’s lives are hanging in the balance here, and that this issue is more than just an academic discussion about hypotheticals. As I was writing this piece a case out of Oklahoma made headlines across the country as several parents in a closed Facebook group threatened a twelve year old transgender girl with castration for using the girl’s restroom at school. This is the inevitable conclusion of the logic put forth by the Christian conservative caucus and their TERF allies.

Trans individuals face some of the highest levels of discrimination across the board including discrimination in employment, housing, and access to healthcare. This discrimination is felt most acutely by trans people of color. A major issue in feminist circles is that of the pay gap between men and women, but that pay gap pales in comparison to that experienced by trans women. This is the result of a society that still has not come to grips with trans womanhood, and people like those who crashed London Pride are contributing to this climate.

You can see this play out in more academic circles too, like with the unity between conservative pop-psychologist Jordan Peterson and second wave feminist icon Camille Paglia who have made profitable careers out of scaremongering on the trans issue. Both have implied, falsely, that young transgender children are having irreversible surgeries. Paglia has gone so far as to say that societal acceptance of transgender and gender non-conforming individuals is a sign of impending civilizational collapse.

Paglia has frequently cited Simone de Beauvoir, who is often credited as being the first second-wave feminist, for her early interest in feminism. This is surprising to me as I consider de Beauvoir’s magnum opus The Second Sex to be a rather compelling argument that women and womanhood should not be defined by biological essentialist notions of sex and gender. De Beauvoir famously remarked in that text that, “One is not born a woman, but becomes one.” This is yet another example of the bastardization of feminism that one must resort to in order to reconcile their trans-exclusionary beliefs.

In this episode of the culture wars historically antagonistic forces in the form of Christian conservatives and radical feminists are comfortable uniting forces to stem the tide of greater acceptance and tolerance of trans people. The tale of the bootleggers and baptists helps us to understand why.