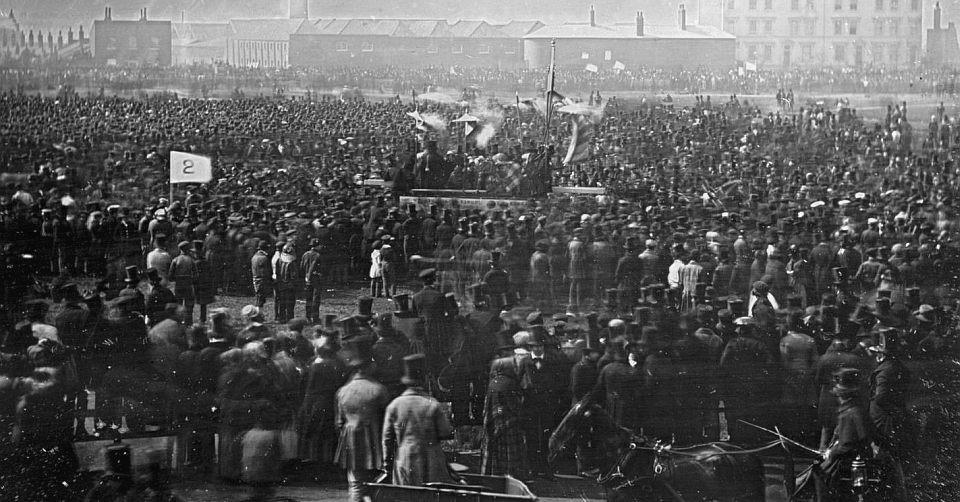 Mutual Exchange is the Center for a Stateless Society’s effort to achieve mutual understanding through dialogue. Following one of the most divisive Presidential elections in recent U.S. American history and a dangerous victor’s contested ascension to power, the political climate is one of intense ideological strife and disagreement. There is no better time to refocus at least some of our efforts on respectful and mutually beneficial discourse. Periodically delving into the weeds of complex theoretical topics to collaboratively experiment with ideas is not only necessary for individual and collective intellectual progress, but is part and parcel of anarchist praxis itself.

“Fighting over the definitions of words can sometimes seem like a futile and irrelevant undertaking. However, it’s important to note that whatever language gets standardized in our communities shapes what we can talk and think about,” says William Gillis in his lead essay of our June symposium. Indeed, rather than pointless “infighting” and social posturing, the Center for a Stateless Society hopes to create a platform for free expression that benefits authors and readers alike by productively clarifying our values and principles.

Whether or not any sort of resolution, consensus, or agreement results from our ensuing dialogue is, perhaps ironically, not the point. Ten anarchist authors have chosen to participate in an in-depth examination of the idea of “democracy” and how it relates to anarchy. I hope they are able to develop, advance, and popularize their individual ideas, but also set a standard for productive, yet diverse debate that is sorely needed right now.

Combining the Greek words demos (“common people”) and kratos (“strength”), democracy means “rule of the commoners.” The philosophical and political debates surrounding democracy extend back 2500 years to Ancient Athens. For much of recent history, many people consider democracy to be a cherished value to protect and spread across the globe, while many others see it as a privilege they hope to someday enjoy. Even others, from all over the political spectrum, see democracy as an enemy to be squashed.

This C4SS Mutual Exchange Symposium will explore what anarchists have to say about democracy. What is the historical relationship between democracy and anarchy? Is democracy always entwined with the state? What should anarchists think of democratic government? What are truly democratic values and how do they relate to anarchist values? How does democracy relate to market exchange and social organization? How should those interested in social change view democracy? How do causes like feminism, anti-racism, anti-colonialism, anti-imperialism, and anti-capitalism relate to democracy?

It is no secret that a President Trump is reigniting debates surrounding democracy and democratic values among many commentators. What will a Trump presidency mean for democracy around the world and how should anarchists react? Moving forward in the 21st century it is imperative that we get to the roots of these nuanced debates so that we are better prepared to build the new world in the shell of the old, while also staying afloat in the stormy seas of authoritarianism, political violence, turbulent geopolitical alliances, and genocide.

The June C4SS Mutual Exchange Symposium features the Center’s own William Gillis, Kevin Carson, Nathan Goodman, and Grayson English in addition to Shawn Wilbur, Wayne Price, Alexander Reid Ross, Gabriel Amadej, Derek Wittorff, and Jessica Flanagan. Every day this month the Center will publish another entry in our ongoing conversation from one of the ten authors fleshing out their thoughts regarding the above questions and issues. Some essays will remain stand-alone contributions while others will provide back-and-forth commentary between multiple authors.

I look forward to seeing these prolific and nuanced writers hash out all their points of disagreement as well as agreement and hope you stay with the Center throughout the entire month to gain both theoretical and practical insights from our symposium.

Before the exchange kicks off tomorrow, June 2nd, here are some preliminary texts and resources related to the longstanding anarchist debate on democracy that I hope are useful going forward:

The Anarchist Critique of Democracy – CrimethInc.

Are Anarchism and Democracy Opposed? A Response to CrimethInc. – Wayne Price

Against Democracy – Coordination of Anarchist Groups

An Anarchist Critique of Democracy – Moxie Marlinspike and Windy Hart

Down With the Law! – Libertad

On Democracy as a Necessary Anarchist Value — Kevin Carson

The Regime of Liberty — Gabriel Amadej

Comments on the Other Lead Essays — Kevin Carson

Mutual Exchange is C4SS’s goal in two senses: We favor a society rooted in peaceful, voluntary cooperation, and we seek to foster understanding through ongoing dialogue. Mutual Exchange will provide opportunities for conversation about issues that matter to C4SS’s audience.

Online symposiums will include essays by a diverse range of writers presenting and debating their views on a variety of interrelated and overlapping topics, tied together by the overarching monthly theme. C4SS is extremely interested in feedback from our readers. Suggestions and comments are enthusiastically encouraged. If you’re interested in proposing topics and/or authors for our program to pursue, or if you’re interested in participating yourself, please email C4SS’s Mutual Exchange Coordinator, Cory Massimino, at cory.massimino@c4ss.org.