My post about Donald Trump’s immigrant-deportation proposal was picked up by Newsweek. This screen shot is featured in an anti-Trump ad produced by presidential contender John Kasich. The ad, suggesting a comparison between Trump and the Nazis, has been widely discussed by news outlets and other sites. (HT: Joel Schlosberg.) 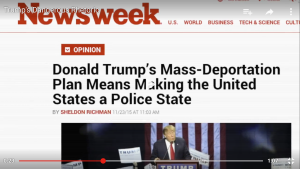