Studies
We Are All Degrowthers. We Are All Ecomodernists. Analysis of a Debate.
Kevin Carson | Support this author on Patreon | November 18th, 2019 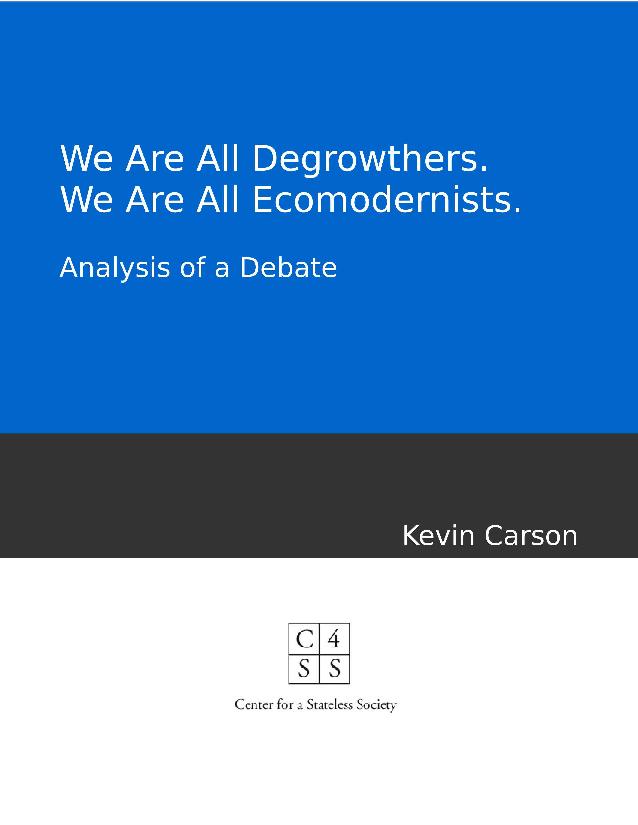 View or download a PDF copy of Kevin Carson’s full C4SS Study: We Are All Degrowthers. We Are All Ecomodernists. Analysis of a Debate.

One of the biggest problems with the debate over “degrowth” is the term itself. In many ways, “degrowth” is an unfortunate choice for a label because it is so ambiguous. On its face it carries some unfortunate visceral primitivist associations. At the same time “growth” itself is an equally ambiguous word, serving for many as a stand-in for technological advancement and progress of all kinds.

And it raises questions as to just what its proponents are seeking degrowth in: Standard of living? Consumption? GDP? Resource use? Any number of alternative scenarios are at least plausibly compatible with the “degrowth” label, if it is taken literally at face value. No doubt the kind of neo-primitivism associated with the Archdruid Report would qualify. But the post-scarcity communism of Star Trek — a moneyless economic system in which virtually any good can be obtained from a matter-energy replicator, the concept of GDP is meaningless, and humanity’s ecological footprint on Earth is close to nonexistent — qualifies equally.

The problem is compounded by the fact that both advocates of degrowth and its ecomodernist critics often fail to clearly define, in the course of debate, just what they mean respectively by the terms “growth” and “degrowth.” It’s easier by far to pick up on what emotional associations those terms carry for them.

In many cases the best we can do is attempt to reconstruct, from their statements in passing, some of what they mean by the terms. This paper is my attempt to do so — and evaluate the areas of disagreement between the two sides and synthesize the positive aspects of both — based on a recent exchange between degrowth advocate Jason Hickel and ecomodernist Leigh Phillips which provides a pointed illustration of the issues involved. In the course of analysis, I will be relying primarily on the exchange between Hickel and Phillips, and subsequent commentary on it by others; I will refer to older and more fundamental texts behind the degrowth and ecomodernist movements, but will do so for the most part only to shed light on the current debate.