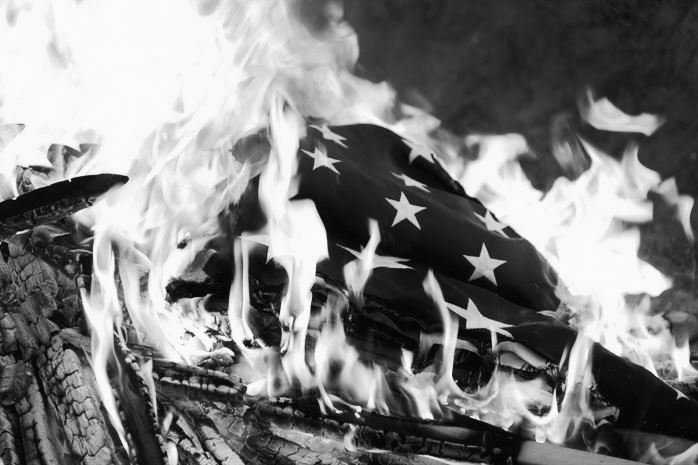 Who Are We Burning Flags For?
Lucy Steigerwald | @lucystag | November 19th, 2017

On October 24 a judge dismissed the charges levied against several protesters who burned the American flag at the Republican National Convention last year. The protesters weren’t technically charged with burning the flag because that might constitute a violation of free speech. The protesters were charged with one of the state’s many items in its toolbox: disorderly conduct — as well as obstruction. The judge, however, noticed that this still seemed a bit like a violation of free speech, so the charges have gone away. Better late than never.

Meanwhile, a Louisiana parish has decided, contrary to Texas v. Johnson (1989) that flag burning is against the law. The state branch of the American Civil Liberties Union (ACLU) begs to differ, but they have been through this sort of case before. One recent, disturbing example was Pennsylvanian Joshua Brubaker who was arrested in 2014  after he wrote “AIM” (American Indian Movement) on an American flag and displayed it on his porch upon hearing that the site of the Wounded Knee Massacre was for sale. It’s appalling enough to have people arrested for protest that ostensibly could have endangered others, but to be arrested for displaying what amounts to a banner on your own property is another level. After the local ACLU sued on his behalf, Brubaker won a $55,000 settlement.

Local and state authorities continue to ignore Johnson and pass laws that attempt to punish flag burning and desecration. In the recent past federal politicians aiming to look good–including then-Sen. Hillary Clinton–have supported laws or even constitutional amendments that would criminalize what is clearly an act of speech.

Just because flag burning and desecration is legal doesn’t mean that local cops and politicians will treat it as such or that people won’t be outraged by it. Quarterback Colin Kaepernick’s initial knee protest against police brutality and racism in America was so minor, polite, and restrained. His reward is to be an unsigned NFL player and to have his protest taken out of his hands in a clumsy anti-Trump fever. Fair enough to the latter, nobody owns a protest or taking a knee during the anthem. Still, he’s gotten so much flak for something so quiet, so respectful, what chance do any of us have when we try to diminish the power of that symbol of statism? When we have bigger changes that we dream of than Kaepernick does, where do we begin?

The flag is powerful. It is transubstantiation, with an appalling lack of respect for metaphor or even property sometimes. Every veteran, see, fought for the flag. Every American flag is like the other, and each is imbibed with the United States. Not anything bad about it like militarism, or police brutality–problems big enough to make a person refuse to put their hand over their heart, or remove their hat–no, just the celluloid version of what could have been, but was never going to be, the fairytale.

This worship of the flag has real consequences. As the satirical Onion put it once, “U.S. Flag Recalled After Causing 143 Million Deaths.” Commitment to nationalism invariably means forgetting about the humans who live there, unless you’re valuing their lives one thousand to one over that of someone who lives somewhere else. A commitment to nationalism is taught in rituals such as pledging allegiance to the flag and standing in the proper, respectful fashion for the anthem. Subsequently, it would follow that if you wish you fight those messages, iconoclasm is the answer. Destroy those deified symbols that reinforce the collective notion of a state, and its superiority over individual human rights and freedoms.

Unfortunately, burning flags rarely imparts the subtlety and the depth that is needed to change minds. Sometimes you want to do it — like if you’re listening to Phil Ochs and thinking about the military industrial complex and you suddenly really want to desecrate a flag (uh, for example). You want to smash something sacred to the state because they went to war and they’re never going to stop. But for every burning flag that an anarchist might mean with love and with empathy for fellow humans, someone else–most anyone else–will read it as hateful, reactionary, and, in all likelihood, socialist or communist (in the most pejorative, unnuanced, most Soviet sense).

Ironically, the symbolism of burning a flag may not convince people. If you believe that this act represents spitting in the face of the best of the best geographical location in the world–scorning Americans who suffered in hellish war zones over the past two centuries–watching it will not change your mind. However, the number of people who actually believe that we should outlaw such an act makes doing it for its own sake important. According to a Cato Institute poll, seventy percent of Republicans believe in a law against flag desecration. Over fifty percent agree with President Trump’s bizarre spasm of an idea-tweet that burning a flag should void someone’s citizenship.

The same people who think flag desecration means more than the act of destroying an object are the same ones who need to see that it is merely speech, and they need face the fact that nothing terrible happens when you express your ideas this way.

Burning a flag is morally, and perhaps philosophically,like standing on a soap box and speaking, but it doesn’t impart complexities that the people with their ears and eyes stopped will be able to comprehend. The people who saw the RNC activists burning the flag and the nosey officials angry about Joshua Brubaker’s American Indian Movement flag couldn’t understand the message, or they refused to. They read it as an assault on all they held dear instead of an outcry against systems that crush human beings.

You can’t change nationalism through one grand, cathartic act, as much as it feels like you should be able to–blow up Mt. Rushmore, burn all the flags there aren’t black, rainbow, or purple and pink, and then we’ll all be free. It’s going to happen so much slower than that, so much more carefully, and with so many more words. It’s a slog, and it does mean speaking to people who think we’re desperately wrong and terribly naive (at best). Letting them rant and rave, and then telling them that that’s not so and it doesn’t need to be this way.We need not and should not respect the meaning of the flag. We should try to destroy that meaning, but as righteously tempting as it is to try to destroy it with fire or spray paint, it seems unlikely that the best of anarchism and anti-statism will ever come through that way.