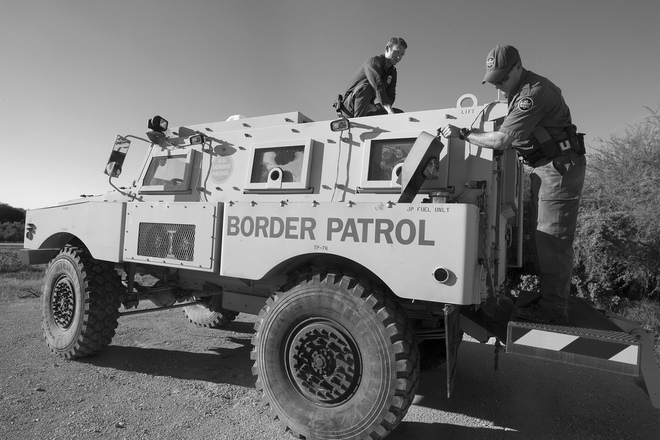 This is the second part of the series called “Nice Cops and Other Cryptids” exploring apologism for prominent agents of the state. Part 1, “Nice Cops” can be found here.

Most people don’t realize the activities and behaviors that are normalized in the U.S. borderlands. Almost every night a Border Patrol helicopter will fly low over my Latinx neighborhood with a spotlight looking for people committing the crime of being born across a border or just having brown skin. This is normal within the 100 mile constitution free zone that touches each border and extends about 30 miles into Mexico. What passes as reality here resembles a low intensity war zone to every international traveler I invite. The aggressive and unconstitutional internal checkpoints tend to frighten and confuse my guests. I can’t count how many people I know who have been held up at gunpoint by Border Patrol even though they are documented. These small examples are nowhere near the levels of violence that have become commonplace, but they hint at the level of infrastructure dedicated to this impossible pursuit. The sociopathic nationalism of the soldier finds its cracks exposed in the borderlands. A Border Patrol agent tends to make an introductory pay of $70k a year, and immigration enforcement has, by far, the largest number of employees and price-tag of all federal law-enforcement organizations. Nationalist democracy depends on the impossible and endless creation of an unworthy Other, and borders serve this symbolic and practical purpose.

Border Patrol has recently set about rebranding itself as a humanitarian organization. This is much to the disdain of anyone who actually does humanitarian work in the borderlands or has ever been forced to interact with Border Patrol when they thought they were undocumented. Just recently Border Patrol raided an emergency medical humanitarian aid camp in the borderlands. Border Patrol and Immigration and Customs Enforcement (ICE) are occupying armies intent on criminalizing free movement and killing or kidnapping anyone unfortunate enough to be caught in their snares. It is no wonder that they are fueling a missing persons crisis.

Many agents wholeheartedly believe the lies even when their own direct experience contradicts them. After all, they do sometimes apprehend truly horrible individuals, and they do also occasionally offer nominal acts of kindness such as allowing a dehydrated person water prior to shipping them off to the Operation Streamline deportation pipeline. The Border Patrol twitter feed is mostly just comprised of pictures of marijuana they seized, demonization of migrants, cowboy-style romanticization, and a sort of humanitarian propaganda that paints them as the ethical saviors of the borderlands with spun-up tales of daring rescues or gentle offerings.

The average agent can believe the lie of humanitarianism because they cannot, or choose not to, see the structure which they enforce. The protocol of “Prevention through Deterrence” channels migration through the most dangerous areas of the desert. As many say, it is “designed to kill,” and, while it achieves that goal, it has not notably decreased migration but only increased the death toll. A side-effect of this is that the Border Patrol strategy has actually subsidized the cartelization of the Narcos or borderlands drug cartels they claim to fight. These cartels make a mint by controlling the flow of individuals crossing the border. With Border Patrol controlling the vast majority of the areas, cartels need only dominate certain high risk sectors. It is then easier to ensure that a crosser be placed with one of the cartel’s low level guides and coerced into carrying some degree of contraband. Cartels are able to outsource the most dangerous aspects of their business model to migrants fleeing struggle or seeking opportunity. This dovetails nicely with the rampant corruption of Border Patrol agents and their direct complicity and alliances with the cartels. It is a well-known economic fact that as risk for trafficking increases and shortages occur, profit margins rise and the most brutal conquerors of the black market are systematically rewarded, leading to rapid increases in violence and financial gain for the Narcos in those sectors.

Open migration and ending the war on drugs are the quickest paths to further destabilizing the horrifying drug cartels oligopoly of violence. But the average agent has no occasion to see that. They see any migrant as a potential drug mule or rapist, and they act with the according levels of righteous cruelty. Border Patrol agents have no occasion to ask what the cartels leveraged against the Central-American economic refugee to force them to carry contraband. They ignore or fail to observe the impact of decades of neo-colonial economic policy and foreign interventionism and their impact on the structural roots of Latin American migration northwards. It is not a coincidence that Border Patrol agents are infamous for destroying actual humanitarian aid left in the borderlands or partnering with and outsourcing their dirty-work to far-right, reactionary border militias.

One of the classic left-liberal or right-wing defenses against the claims of white supremacy inherent in U.S. southern border policy is the fact that Border Patrol employs a substantial number of Latinx individuals. Acknowledging the economic impact of structural racism on brown families in the U.S., Latinx Border Patrol agents are only slightly less culpable than their white coworkers, and, if anything, they inflict a higher degree of betrayal on the communities they devastate. After all, the Border Patrol had its roots in the racist, Minutemen style, Texas Rangers militia that was responsible for thousands of extrajudicial murders of Mexicans(-Americans) after the Gadsden purchase. Border Patrol agents of all races and ethnicities are still kidnappers, murderers, and fascists no matter how they try to minimize or aggrandize their patriotic values in order to justify their actions. I won’t be the one to fault a first generation Latinx family for flying an American flag; immigration is too complex for that. However, actively siding with Border Patrol and ICE to suggest one’s trustworthiness is far from ethical behavior.

A great example of the progressive, brown Border Patrol agent and the insidious ability to minimize complicity is Francisco “Paco” Cantú. A bilingual, güero (white-passing or light-skinned Latinx person) with a distinctly hipster look, Cantú was a Fulbright Fellow and received his MFA in writing from the University of Arizona where he is now an instructor. He comes off as nice and likable; he’s young and conventionally attractive in many respects.

Cantú is capable of criticizing aspects of what the Border Patrol does in small ways and is quick to share stories of peeing on migrants’ clothing and other similar incidents through poetry. But amidst this veneer of progressivism, he inflects a deep and enthusiastic respect for the Border Patrol and his time as one of them. He thinks of himself and his time in cowboy terms.

As a young student Cantú was an outspoken leftist and claimed that he joined the Border Patrol, in part, almost as a form of investigative journalism. In the episode of “This American Life” where Cantú read from his upcoming book, Ira Glass remarked that Cantú “sidestepped much of the usual politics and just offered descriptions of what he saw.” What this means is that Cantú decontextualized the politics and divested the stories of their politically violent connotations. Through his silky language, Cantú almost eroticizes the Border Patrol and their work. He claims his work came from a desire to know the desert and to help people. As he describes his mother’s disappointment at him for joining the Border Patrol, he further justifies his choice to become an agent because, at least, he can be there and speak with people in their own language, know of their home countries, and that “there will always be agents regardless of who they are.” As he recounts their destruction of a group’s clothing and food or his trainer’s murder of a migrant, he does so with an almost playful tone. His upcoming book has a $100,000 payout attached to it. He has built his career and fame as a writer through participating in the culture of cruelty that typifies Border Patrol. His profit is others’ blood. In addition to that, the gentle sheen of his writing serves to normalize and beautify things that should remain abhorrent. His candor is from a story that could and should be told with disdain and shame. Instead he paints a picture of the Border Patrol that makes it real, tangible, and almost beautiful and serves as an unpaid propagandist for state violence even with his minimized accounts of their crimes. This is lower than the Border Patrol officer who knows he is committing a crime but does not seek to glorify it.

If Cantú’s crimes are disguised as neutral, another figure I’ve met dresses his in progressivism. This guy is a white cis-male of medium build who identifies himself as bisexual, polyamorous, and progressive. He showed up at a polyamory event, much to the disgust of some local members, but protected by the defense of others. At the time I was invested in various forms of counter-recruitment and wanted a person inside of Border Patrol, so I later spent a significant amount of time talking with him about politics and even offering him a number of avenues to quit (that he claimed to have wanted), including connecting him with a former military sniper I had seen defect. He couldn’t be bothered. He said he was too used to the “lifestyle,” meaning he was unwilling to part with the generous pay plan. Any attempts made in our conversations to bring up his culpability in even the gentlest of terms was always rebutted with variations of: “Many migrants are bad people,” “I’m a progressive guy,” or “most of my friends on the force are Latino.” This is the future that liberals want;  a scummy, spineless, and heteronormative bisexual averting accountability for his state violence and trying to penetrate alternative lifestyle spaces. No amount of politeness or voting for Bernie can overcome the fact of what he does with his life. If anything, softening the harsh realities of his choices is a deeper dishonesty.

Speaking of whitewashing violence, John Oliver recently served as the bootlicking arm of the Border Patrol propaganda machine in an episode which reinforced the myth that the problems of the border could largely be solved by increasing scrutiny of Border Patrol recruits, maintaining the number of agents, imposing harsher punishments for the ‘bad apples’, and that the organization serves in part as a humanitarian organization. Even these “progressive” agents fall in-line in an agency chocked full of extensive sexual abuse of female agents, much less the largely undocumented cases of rape and violence against female migrants. We don’t talk of minor changes to the gestapo; we demand immediate abolition and work to create functional humanitarian and community defense alternatives to dealing with the mess they’ve created for us.

Most Border Patrol agents one meets are overtly fascist, xenophobic, racist, nationalist scum, but even the ones that are not those things are still abhorrent and present distinct threats as a result of their progressive facade. Cantú claims to already have a fear of retribution from Border Patrol for what minuscule critique he’s offered thus far. Yet, there are are real whistleblowers in Customs and Border Patrol and paths for others to speak out. It’s time to be bold and not pass the buck to profit from a position of power in a sociopathic regime of brutality. Abolish the gestapo. ¡Chinga la migra!