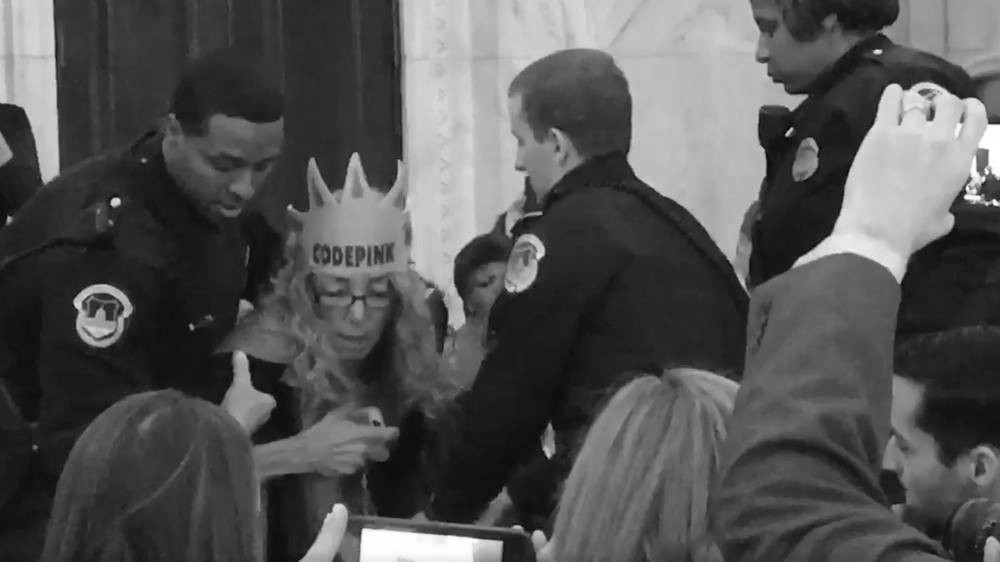 In Wisconsin, buzz has been building over a “Campus Free Speech Act” which creates harsh penalties for interrupting, protesting, or otherwise disrupting speakers invited onto colleges campuses. Meanwhile last week, 61-year-old Code Pink protester Desiree Fairooz was convicted and sentenced to a year in prison for laughing.

The chuckle itself took place during Attorney General Jeff Sessions’ confirmation hearing on January 10th. It was in response to Sen. Richard Shelby’s assertion that Sessions had a track record of “treating all Americans equally under the law.” This is the same Jeff Sessions that was declined for a federal judge position due to charges of racism: such an assertion was bound to prompt reflexive incredulity.

“I would describe it as a reflex,” says fellow Code Pink Protester Ariel Gold, who was seated near Fairooz. “I was sitting about two people away, and I would say the noise was quieter than a cough.” The Justice Department, under Sessions, convicted Fairoz of disrupting Congress and “parading or demonstrating on Capitol grounds,” a.k.a daring to wonder aloud why she was being arrested.

“Why am I being taken out of here?” she asked, “This man is pure evil. Don’t vote for Sessions. I was going to be quiet, and now you’re going to have me arrested? For what?”

Fairooz is not the first to be arrested for protesting Session’s nomination. However, her situation is perhaps the most absurd. Twice in January, members of the NAACP (including organization president Cornell Brooks) were also arrested for peaceful sit-in demonstrations in front of Sessions’ senatorial office in Mobile, Alabama. In February, a Bremerton councilwoman was arrested for expressing dissent at another confirmation hearing for Sessions.

Cognitive dissonance is one hell of a drug. We get near daily lectures about the supposed strangulation of our free-speech rights by “oversensitive politically-correct types.” Those lecturing us are the same people who obsessively document every joke made at the president’s expense on television as if it were a potential federal offense. And if we’re not vigilant, it just might be.

“Free speech” will always be a hot button issue and understandably so. The ability to organize, present, and express our dissent with those that lead and/or oppress us without state-enforced legal penalties is what separates us from monarchies and dictatorships.

However, we need to keep sight of the central intent of free speech: that of expressing dissent against those above us. Otherwise, one can tend to get caught up in these sort of “teach the controversy” shell games, where we pursue crusades against “censorship” that turn us into unpaid publicity interns for people like Ann Coulter or Milo Yiannopoulos. If everyone is indeed guaranteed the right to whatever abhorrent nonsense they want to preach, then that same right certainly extends to anyone who wants to pull up a soapbox and explain why that speaker is awful.

Republicans in 19 states are currently pushing for some form of anti-protest legislation. Many bear ominous wording about “racketeering,” “asset seizure,” and “economic terrorism.” The more egregious, wildly unconstitutional ones are already starting to falter, but there is a momentum behind these initiatives that needs to be monitored.

If we can’t even laugh in the face of the people holding us down, what rights have we got?