Books and Reviews
The State Doesn’t Conserve, It Only Destroys
Chad Nelson | Support this author on Patreon | January 8th, 2017

A Review of Janay Brun’s Cloak and Jaguar: Following a Cat From Desert to Courtroom

If you’ve never heard of the now deceased Macho B, you’re not alone. Most people outside of Arizona (and perhaps New Mexico) probably haven’t. Macho B was a wild jaguar who roamed the borderlands between Mexico and the southwestern United States. At the time of his tragic death in 2009, he was the only known jaguar who called the United States home. Because he was such a rarity, Macho B (Spanish for “Male B,” denoting his status as the second of two known male jaguars in the United States during the early to mid 2000s) was quickly commodified by state wildlife authorities and one private “conservation” group who desperately wanted to capture and control him for fame and fortune. (By the end of the book, other readers too will likely feel compelled to place the conservation term in quotes as it becomes evident many self-proclaimed conservationists do far more damage than good.)

It’s no secret that we humans, by and large, have little regard for animals. Sure, we treasure the lives of those domesticated animals who live with us, yet we routinely harass, hunt, torture, kill and unnecessarily eat most of the rest of them, making us the real savage beasts. Macho B’s life was no exception. His was cut short thanks to our dominionist attitude toward all animals and other things wild. Rock band Pearl Jam captures this repugnant attitude perfectly in its 2000 hit, Do the Evolution:

I’m ahead, I’m a man/I’m the first mammal to wear pants, yeah/
I’m at peace with my lust/I can kill ’cause in god I trust, yeah/It’s evolution, baby.

Because virtually every North American jaguar lives exclusively south of the U.S. border, Macho B became a prize for his human killers who cloaked themselves behind the veil of “research.” But their dubious claims to be after scientific knowledge would not hold up under the ensuing scrutiny that occurred after Macho B’s death. That’s thanks to whistleblower Janay Brun, who found herself the subject of the state’s criminal investigation. Yes Brun, the same person without whom the facts surrounding Macho B’s murder would never have come to light.

Janay Brun first saw Macho B while out on a desert walk with her dogs in 1999 and immediately became enchanted by his presence in the area. The discovery was so profound for Brun she became an independent big cat researcher, essentially teaching herself the fine art of big cat observation and tracking. Some years later, she was hired by an Arizona-based jaguar conservation group who purported to focus on tracking and documenting jaguar movements and habits. For Macho B, it was all downhill from there despite Brun’s best efforts.

Brun’s story is separated into three main time periods. The first takes place during her lead-up to, and more immediate post-Macho B discovery periods. Excited, inspired, and in love with Macho B, Brun sought to unite her passion with her career.

That led to phase two of the book, during which time Brun was a volunteer, and then an employee of the Borderlands Jaguar Detection Project (BJDP), a private non-profit headed by a hunter of all people — Jack Childs. She quickly learned that protecting jaguars was a distant secondary goal of the organization. Far more important to BJDP and its state counterparts in Arizona Game & Fish and United States Fish & Wildlife, were the academic accolades and the grant money that stood to be gained from a Macho B capture. Brun’s detailing of the downward spiral she experienced while in the employ of Macho B’s killers is tragic and gripping. Even with foreknowledge of the outcome, one can’t help but root for Macho B’s evasion of the authorities. One of the saddest elements of the story, for me, was that Brun had privately committed herself to sabotaging the snares her cohorts laid for Macho B (snares they publicly claimed were for a mountain lion and bear study only), yet she was unable to accomplish the act in time to save his life. 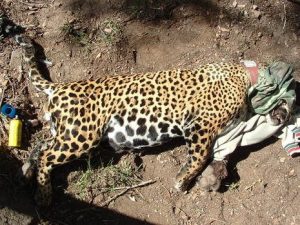 Part 3 of the story details the post-capture and death coverup by Macho B’s killers. They vigorously denied intentionally capturing Macho B in a foot-hold snare for the purpose of radio-collaring him. But since they had him, of course they needed to “study” him; so went the script fed to the public. They also denied that Macho B’s cause of death was something other than the extreme torture the elderly jaguar endured at his captors’ hands. Those denials, along with the steadfast rejection of their own criminal negligence following Macho B’s “release” into the wild, continues to this day despite readily available evidence to the contrary.

As with almost all whistleblowers, Janay Brun became the main target of federal law enforcement. This despite Brun being the only person throughout the saga who had Macho B’s interests in mind. Brun makes clear that her prosecution led her to see the state for what it truly is — a criminal gang hellbent on preserving its secrecy and power. She has continued, long after the conclusion of her legal case, to be threatened by Macho B’s killers for exposing the truth via publication of her FOIA requests at her blog — Whistling for the Jaguar.

I must admit I am nervous about what consequences await Janay Brun for writing this book. Should such consequences arise, I sincerely hope those in the animal liberation, anarchist, and environmental advocacy communities, as well anyone who values the sanctity of the lives of all sentient beings, will help and defend Brun.

In the latter two portions of the book, readers also learn about the absurdly tangled bureaucracy that is state and federal wildlife “management” and “conservation.” As Brun’s court case makes clear, the wildlife authorities themselves are wholly confused and misinformed about their own rules and regulations regarding endangered species. Yet they destructively forge ahead with these types of “studies” anyways, putting the lives of so many people and animals in jeopardy simply because there is a dollar to be made or a study to be published.

The immigration authorities and their offensive border wall also play prominently in this tale, tearing apart the fabric of the land which Macho B and many other species call home. One can only imagine how much worse this travesty will get under the xenophobic, wildlife-hating Trump administration.

Brun’s book concludes with, among other things, the mention of a newly-spotted male jaguar (might he be Macho B’s son or grandson, she wonders?) who has been seen regularly in Macho B’s old stomping grounds. There is hope that individual actors like Brun, who now know about the vicious assault on these beautiful animals, will be motivated to sabotage the conservationists’ and state wildlife authorities’ inevitable efforts to capture and kill him.

Destroy the traps, cover the animals’ tracks, and let them live in peace with the freedom and anonymity they deserve!