It seems silly to continue harping on the incoming tidal wave of fascism, but if there’s one thing C4SS – and the anarchist tradition in general – is good at, it’s making sure you don’t forget that we’re in for a long god damn ride. 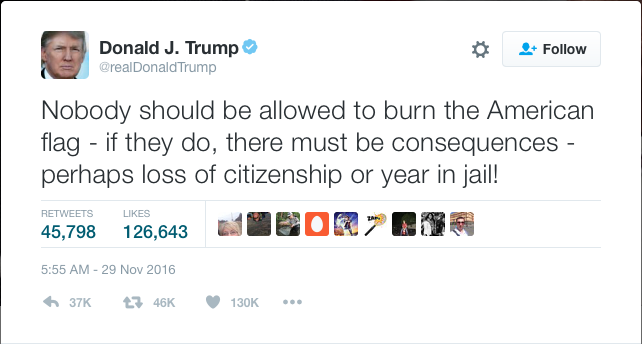 Earlier today, Trump tweeted that anyone who burns the American flag should face “consequences,” including up to a year in prison, loss of citizenship or both. Flag burning is, by the way, a constitutionally-protected act of symbolic speech, which is something that would normally be important to this discussion but since we’re dealing with fascism-as-a-ruling-party it’s suddenly just an interesting sort of factoid.

I’ve heard a lot of folks say that we should ignore the wacky things Donald Trump says in public and on Twitter. Their justifications usually revolve around two main planks: that Trump is a richer, now-more-powerful version of an internet troll in that if you ignore him he’ll find something else to focus on and stop saying bonkers things about freedom of speech, dissent, etc.; and that he’s saying this stuff because he knows the media will focus more on his wild proclamations than on his failed business empire, his myriad conflicts of interest and his general myopia about becoming president.

At this point I think the evidence bears itself out nicely that internet trolls don’t just go away if you starve them of attention. More importantly I think we’re finally presented with the proof that there’s a marked fucking difference between your garden variety, annoying internet trolls and the assortment of neo-fascists, cultural conservatives and thugs Trump now represents on an international stage.

If there has ever been any doubt that resistance to Trump is necessary, here’s your moment of clarity: even if he can’t do a quarter of the things he says he wants to do, even if he ends up becoming a mockery of fascism, a modern-day Charlie Chaplain-in-the Great Dictator, it’s still too fucking much. He’s still making proclamations that show us where he wants to take the country. It’s absolutely right to assert that we can’t ignore his failures and missteps – but we can’t ignore this, either. We can’t ignore what he says, or allow it to become normal in our ears and eyes and thoughts.