At first glance, Missoula, Montana’s agricultural non-profit, Garden City Harvest, might seem like an ill-advised target for the Animal Liberation Front’s graffiti. By most accounts, Garden City Harvest does some fantastic work in its local community. According to GCH’s website, its mission is “to build community through agriculture by growing food with and for people with low incomes, offering education and training in ecologically conscious agriculture, and using our sites for the personal restoration of youth and adults,” making the vandals’ actions all the more curious. GCH’s executive director Jean Zosel believes the ALF’s actions “cross the line,” stating, “people are angry, they don’t really know the whole story, they don’t really know Garden City Harvest, they don’t know what we’re accomplishing here.”

Despite Zosel’s comments, the ALF seems to know exactly what GCH is accomplishing — and it involves far more than gardening, food banking, and education. Earlier this month, police notified GCH that somebody had spray-painted “murderer” on their main office building along with an ALF tag. GCH immediately identified the acronym and the culprits, as well as their probable motive: GCH’s raising and killing of pigs as part of its so-called benevolent work. GCH claims it kills pigs as a way to teach school children where their food comes from. It’s probably safe to assume the kids don’t show up for GCH’s throat-cutting ceremony where pigs scream and thrash in their final moments. 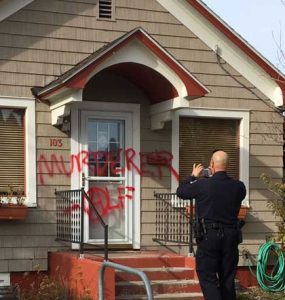 Many within the animal advocacy community are issuing harsh criticism of the ALF for choosing GCH as a target. Even those supporters brave enough to refuse to condemn occasional ALF vandalism feel like GCH was an unwarranted victim. If such acts are going to be carried out, they should be reserved for more worthy targets like slaughterhouses, pharmaceutical companies, butchers, hunting lodges, fishing boats, gun shops, etc. Such criticism fails to look at the plight of non-human animals in a nuanced fashion, however.

A similar intramovement debate surfaced earlier this year when animal rights group Direct Action Everywhere (DXE) repeatedly interrupted speeches by “progressive” politicians like Bernie Sanders and Hillary Clinton in an effort to raise awareness for the plight of animals. Why, critics asked, would the group not focus on right-wing politicians who are more obvious enemies of animals? (Leave aside for a moment the uniform awfulness with which all politicians on the Left and Right treat animals through their furtherance of neo-liberal, capitalist policies.) Through protests and direct action aimed at the left, groups like DXE and ALF reach people of a more open-minded, compassionate, dare I say progressive bent — targets who are more ripe for the picking.

While the effectiveness of the tactics themselves are up for debate, the fact remains that animal liberation is a message that’s more likely to resonate with folks on the left, more of whom are of a peace-loving disposition. Even if nobody at a Sanders or Clinton rally, or at GCH, is able to look beyond DXE’s or ALF’s actions and receive the underlying message, it’s very possible people indirectly connected with them might. Conversely, it’s far less likely “researchers” at animal testing labs, or deplorables at a Trump rally, are open to persuasion about animal justice.

As a result of the vandalism, GCH supporters might begin to question their own relationship with animals and the unspeakable horrors that bring them to their dinner tables. They might ask themselves whether animal killing furthers GCH’s mission — to provide low-cost, healthy food to low-income members of the community. In the aftermath of the vandalism, GCH supporters might, for the first time, learn that an all-plant-based diet is more sustainable, affordable, and healthier than the ecologically destructive system of raising, killing and eating animals.

But back to tactics. For the animal liberation movement to be successful, there can be no options taken off the table, no perpetrators exempt from direct action. The targeting of an organization like GCH serves a different purpose than the targeting of one like Huntingdon Life Sciences. Those organizations play different roles in the oppression of animals, and the targeting of them and the reasons behind it must be understood in this context.