The following is Part 2 of Pacifica Radio’s “Long Live Anarchy!” interview with Robert Anton Wilson. Part 1’s transcript can be read here. The interview ends abruptly, and unfortunately Pacifica was unable to find additional reels in their archives. –cn 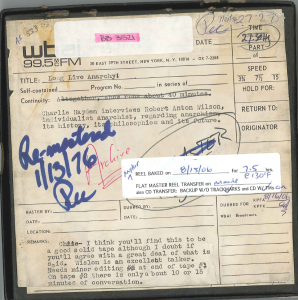 Hayden: How do you answer the charge that anarchism’s an outmoded political belief? That it was a nice theory to attempt to apply to an agrarian society, but in our modern day of technology and industrial society, that anarchism is just simply antiquated?

Wilson: Well, I would reply to that by saying bluntly that it’s just not true. The anarchist idea, I think, is especially well adapted to industrial society. In the first place, as Marx (I always like to quote the enemy when I can), as Marx pointed out, industrial society is creating a sense of solidarity among the working class in a way that didn’t exist under previous systems. Also, the modern tendency of technology as indicated in cybernetics, is towards the destabilization of industry, and towards the self-regulation of the machinery. The whole essence of cybernetics is self-regulating technology which is called homeostasis, or redundancy of control, in the technical engineering language of the cyberneticist. Now this implies, necessarily a decentralization of the human parts of industry. Also, and I am very amused to notice the American Management Association, in their bulletins on cybernetics, are continually forced to use the concept of decentralization. They have even come up with a phrase, “decentralization of authority and centralization of financial control,” which is a flat contradiction.

Hayden: How do you explain the popular misconception, I gather, that anarchists are opposed to all forms of law and order? That anarchy means unrestricted, unrestrained, individual freedom, and actually has become associated (if you read the charges made by such distinguished Americans as Governor Wallace of Alabama, and what have you), that anarchy prevails, which is like saying “pandemonium and holocaust are upon us?” How did this type of idea regarding anarchism evolve? Were there anarchists who indeed were opposed to all forms of law and order or who did go about causing great disruption and problems? I’m thinking specifically of The Haymaker Affair [sic], which I’m only vaguely familiar with, through reading and what have you.

Wilson: Well, to begin with, anarchism is a word which is like a red flag to a bull. The man who coined the word, in the modern world, was Proudhon, and as much as I admire Proudhon, I must say he was overly addicted to the paradox like many great French writers. It’s a peculiar trait of the French to delight in paradox, and Proudhon chose this word anarchism because it was so shocking and paradoxical to the average person who was as then, and still is now, the next thing to saying “I’m a lunatic,” to say “I’m an anarchist.” Proudhon took it, because as I say, he was addicted to paradox.

Most anarchists continue to use the word only out of a sense of solidarity and brotherhood to the great anarchists of the past, many of whom suffered martyrs’ deaths. I’m thinking of Sacco and Vanzetti, and Joe Hill, and Landauer, and so many others, and also in tribute to the great brains of the movement who have contributed, who created so many splendid philosophical treatises, such as Tolstoy, and Benjamin Tucker, and Josiah Warren, and Bakunin, and Proudhon. Since all these men used the word anarchist, it seems to me rather dishonest to abandon the word, if one agrees with their thinking. A few anarchists down through the years have abandoned the word. They have chosen other words, such as libertarian socialist, or mutualist, and at one point, a fellow named [Francis Dashwood] Tandy tried to popularize the term voluntary socialism. I prefer to stick to the word as shocking as it is, in tribute to the great men who have used it in the past. As for The Haymarket affair, that was recognized as a frame-up by Governor [John Peter] Altgeld, who subsequently pardoned the anarchists who remained in prison. He couldn’t pardon the ones who had already been hanged, but Governor Altgeld in his investigation, decided that all of those men had been framed. What happened was that the workers of Chicago were calling a strike, and at a meeting somebody threw a bomb, and several people were arrested who were anarchists, and they were convicted of having thrown the bomb, although subsequent evidence showed that none of them could possibly have had any connection with the making or the throwing of the bomb. Considerable evidence has been developed over the years that it was a police agent provocateur who threw that bomb by the way.

Hayden: How do anarchists generally (seems to me, I have to confess, that I probably hold a number of popular misconceptions regarding anarchy and anarchism), but how can an anarchist who is so totally committed to individual liberty and freedom seek solutions through a political system like socialism? It seems to me that if there was any type of a political or economic philosophy that anarchism could be involved with, it should be a right-wing type of thinking, capitalism or even fascism. Something which did not involve the large concepts of the group working together, and what have you, that socialism involves.

Wilson: Well, here we can get rather deep into anarchist theory which is what I would like to do. I’m afraid once I start getting in deeply, you will interrupt and say it’s getting too abstract. But, well, in the first place, the anarchist movement is part of what I would call the age old movement toward, for want of a better word one has to call it, common decency. If you go back about five thousand years you find the origins of the modern state and the modern class system. And what existed before that, loose tribal confederations, are sometimes called anarchistic. I agree with Benjamin Tucker, that this is an inappropriate use of the word. Tucker said anarchism is liberty possessed by libertarians. These early tribes had liberty in a loose sort of sense, but they were not sophisticated enough to know what they had, and it wasn’t true anarchism. With the invention of the national state which incidentally seems to have come through conquest in every case, the German sociologist Manheimer [sic] pretty thoroughly demonstrated that all the states we have been able to trace to their origins, did arrive through conquest.

We had the beginnings of the class system, in which the great majority toil, not to support themselves, but to support a minority of parasites who live off them. This in its classical form is the slave state as we find it throughout the ancient world. Over the millenniums, this gradually evolves into the feudal state, and later into the capitalist state, but, the basic gimmick remains the same. As for example, the basic gimmick in the land swindle is still the same as it was under the slave state. A small minority own the land. The theory originally given is that they are anointed or chosen by God, and the King rules by divine right. God has elected him to rule. His relatives who are known as the nobility, own the land because they are relatives of the man chosen by God. Everybody else who has been disinherited by God, the rest of us creeps, we don’t own the land.

In order to work the land, to grow crops or whatever else we’re going to do, run a shoe making shop, or whatever, we must purchase that piece of the land on installments from one of the owners. Under feudalism, the lord of the land, the King’s relative, ruled on the basis of this supernaturalistic theory; I don’t think in spite of the hangover of theology into the modern world if anybody got up and pronounced that argument today, that the landlords rule by God’s right, anybody would take it seriously. The reason people continue to pay rent today is that they don’t think about the subject at all. If they did think about it, they’d realize that the only justification the landlord has, is this supernatural theory, and I don’t think they’d stand for it.

Hayden: Well, are anarchists opposed to (there’s an anarchist around New York who has buttons that say “I am an enemy of the state”) … And are the anarchists now, necessarily opposed to the existence of national state and local governments? And how would an anarchist feel towards the beginnings of world government such as the exhibited maybe in a UN with growing power and what have you?

Wilson: An anarchist naturally feels that world government would be just a little bit worse than national government, because [it’d be] more centralized, and even more omnipotent.

Hayden: But (you speak in terms of socialism too) most of or many of the concepts inherent in socialism, what I think of as social service programs, don’t they necessarily involve coercion and force, and by this I mean things like medical care for the aged, requiring medical men to take care of poor people who are sick, building codes which make landlords repair a buildings, which control rent, which prevent fire, disasters, and what have you? It seems to me, all sorts of regulations which are in the interest of the individual, necessarily rely on a larger governmental agency forcing unwilling, even unscrupulous people from violating laws that have been passed in the public’s interest. Do you think this could be solved through voluntary associations? What if the landlords had a voluntary association that had more money, and more guns, or what have you than your voluntary association of an anarchist or citizens.

Wilson: Well this gets to the very bedrock of anarchism. To begin with the anarchist says that all forms of coercion, of a left-wing nature, that we have in the modern world, are the result of not really facing up to the nature of the ruling class, and what has to be done about it. These are all half-measures, and the anarchist opposes all these coercive methods because he thinks that they have not faced up to the real issue. Social security, for instance, although I personally wouldn’t want to see it abolished, under the present circumstances, under the present class tyranny, it’s a necessary protection for the victims.

Printed with the permission of Pacifica Radio Archives.