I wanted to thank Cory Massimino for inviting me to submit a few thoughts on the topic of this important C4SS MES exploring the interrelationships between anarchism and egoism. Given the broad areas highlighted for conversation, I’d like to focus briefly on these two topics:

The short answers to these questions are “Much”, “No”, and “Yes.” But this requires some elucidation.

My comments here are an extension of my reconstruction of Ayn Rand’s legacy as a dialectical project (see especially my book, Ayn Rand: The Russian Radical [Sciabarra (1995) 2013]). For Rand, the concept of “egoism” can never be disconnected from the larger context in which it must be embedded so as to give it transformative meaning.

Indeed, it is with the “ought” that the moral enterprise is concerned. But the ought is inextricably connected to what is; there can be no sundering of the relationship between values and facts. And no project for radical social change can move forth without paying attention to the real, objective conditions that exist.

It is with a deep regard for those real, objective conditions that Rand grounds her ontological, epistemological, aesthetic, ethical, and political principles. One can reject her conclusions and still acknowledge the dialectical intentions at work as she crafted her integrated philosophic worldview.

In the realm of ethics, Rand’s approach rests on a dialectical core. The dialectical notion of relation is key here. Her “objective” approach seeks to resolve the tension between the “classical objectivist” view on the one hand (a view that Rand re-characterized as “intrinsicism”) and the “subjectivist” view on the other hand. For Rand, value is not something intrinsic to reality, not something to be apprehended out there; nor is it something intrinsic to consciousness, with no relationship to the facts of reality. The fundamental fact that every organism faces is the alternative of existence and nonexistence. For human beings, it spells the difference between life and death. But even here, Rand does not put forth a survivalist ethics. She rejects the view that human beings should aim for “a momentary or merely physical survival” (Rand 1964, 24). She sees moral values as part and parcel of the project of human flourishing. Or as Jack London once put it: “The function of man is to live, not to exist” (see Burton 2021). For Rand, “to live” is to flourish, to live up to one’s highest potential in a way that neither sacrifices oneself to others nor others to oneself. That kind of “sacrifice” is at the base of all master-slave relationships, in Rand’s view—a view echoed by thinkers as diverse as Aristotle, Hegel, Marx, and Nietzsche.

Rand is keenly aware that people tacitly accept and practice cultural mores that typically divide them into reciprocally dependent masters and slaves of one sort or another. Her aim is to transcend this lethal dualism by emphasizing that values emerge from the relation between existence and consciousness. For Rand, value is a relation. Values are agent-relative; they cannot be separated from the valuer and the valuer’s purposes.

In The Virtue of Selfishness: A New Concept of Egoism, Rand (1964), like dialectical thinkers before her, addressed seemingly opposed perspectives, in an attempt to identify their common root, thus showing them to be false alternatives. She does this throughout her philosophic critique, in her oppositions to the dichotomies of mind and body, the ideal and the material, the analytic and the synthetic, reason and emotion, the rational and the empirical, the moral and the practical, and so forth. (Rand’s intellectual protégé, psychologist Nathaniel Branden [1986] 1993, 241), would later extend this to an analysis of the culturally-induced dualism of gender categories.) Within ethics, Rand repudiates the false alternative of “conventional selfishness”, which entails the sacrifice of others to self, and “conventional altruism”, which entails the sacrifice of self to others. For Rand, these conventional moral codes share the implicit premise that human beings should be treated as sacrificial animals.

Some of Rand’s critics have dismissed her views as solipsistic or atomistic, focusing on some of her infamous quips: “Man is a contractual animal” (Rand 1972, 127). Or “there is no such entity as ‘society’” (Rand 1964, 92). As a polemicist, Rand was fond of triggering people with in-your-face, over-the-top comments such as these. But they are distortions of her larger, more enriched perspective.

First, we can’t drop historical context. Rand was educated under the Soviets (see Sciabarra and Solovyev 2021) — from whom she learned a dialectical approach to social analysis. She came to America during a time when the “oversocialized conception of man” (as sociologist Dennis Wrong [1961] characterized it) was in vogue. During this period, the “social” became a euphemism for the subordination of the individual, the dissolving of the unique human personality into an undifferentiated mass. As a neo-Aristotelian, Rand rejected both that oversocialized conception and the atomistic “reified abstraction” of “economic man” as false alternatives. She argues that it is precisely because we are social beings that we require a certain constellation of social relationships that will enable us to act efficaciously and creatively, to exchange the products of our efforts, and to cooperate in free association with one another.

That the individual is inescapably a part of a cluster of relationships was best summarized by Nathaniel Branden (1980, 61):

Rand and Branden both argued that since our growth, creativity, and our very capacity to flourish are dependent upon a certain systemic and existential context, it is also true that the absence of this context will necessarily lead to a set of social practices that are inimical to human flourishing — and survival.

Keeping these insights in mind, we can easily see how Rand’s approach would have coalesced nicely with the themes presented by Marilyn Frye in her essay “Oppression” (from her book, The Politics of Reality — a more Rand-friendly title would be hard to come by!). Frye (1983) proposed an illuminating analogy to the ‘birdcage’ in helping us to understand the dialectically interconnected aspects of what it means to be oppressed. She writes:

“If you look very closely at just one wire in the cage, you cannot see the other wires. If your conception of what is before you is determined by this myopic focus, you could look at that one wire, up and down the length of it, and be unable to see why a bird would not just fly around the wire any time it wanted to go somewhere. Furthermore, even if, one day at a time, you myopically inspected each wire, you still could not see why a bird would have trouble going past the wires to get anywhere. There is no physical property of any one wire, nothing that the closest scrutiny could discover, that will reveal how a bird could be inhibited or harmed by it except in the most accidental way. It is only when you step back, stop looking at the wires one by one, microscopically, and take a macroscopic view of the whole cage, that you can see why the bird does not go anywhere; and then you will see it in the moment. It will require no great subtlety of mental powers. It is perfectly obvious that the bird is surrounded by a network of systematically related barriers, no one of which would be the least hindrance to its flight, but which, by their relations to each other, are as confining as the solid walls of a dungeon.” (4–5)

In Russian Radical, I present a reconstruction of Rand’s understanding of social relations as filtered through a trilevel model by which to grasp the dynamics of power — and the requirements of freedom. 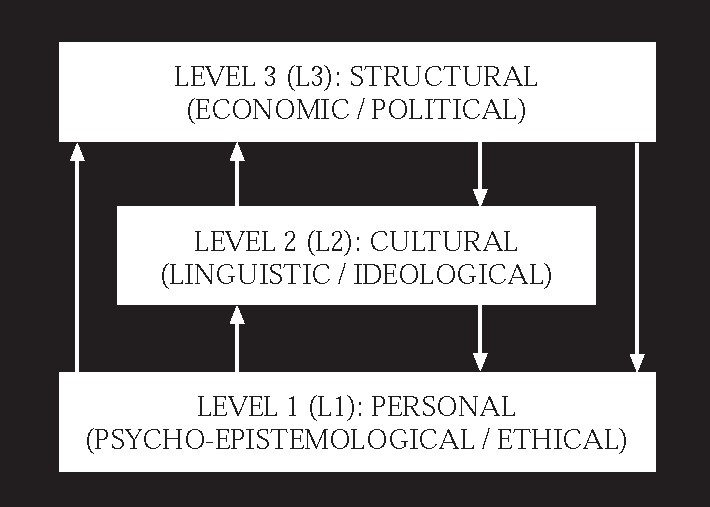 One would think from this model that the “ethical” is a purely L1 relationship. But Rand makes it clear that an exclusive focus on L1, without exploring its implications as filtered through L2 and L3 in their reciprocal connections, is to commit the fallacy of the frozen abstraction. In this context, this fallacy consists of substituting one particular level of analysis for the wider abstract class (or whole) to which it belongs. Indeed, relations of power have a deleterious impact on the individual’s moral life, but this impact is a reciprocally related cause and effect of each of the other levels — and all the levels in the totality of their interrelationships. Relations of power are manifested on and perpetuated by personal, cultural, and structural dynamics. They are the ‘birdcage’ if you will. And it is only by challenging and changing these dynamics across all their manifested modalities that it becomes possible for human beings to begin dismantling the cage, so as to take flight, free as birds.

I should point out that while Rand the “egoist” rejected anarchism, advocating a voluntarily financed government as a means of transcending the ‘false alternative’ of anarchism versus statism, her view of government is as much of an ahistorical Weberian Ideal Type as is her conception of “capitalism: the unknown ideal” — quite different from “capitalism: the known reality.” It’s not that Rand was unaware of that known reality; it’s that the social system she found most conducive to human flourishing has simply never existed. One may reject Rand’s particular arguments and even her worldview and still appreciate the dialectical analytical models with which she operated to explore the broader context — the personal, cultural, and structural interrelationships — so crucial to our understanding of human freedom and flourishing.

In conclusion, it should be noted that there is nothing in Rand’s work that would oppose communitarian mutual aid. I argue in Chapter 13 of Russian Radical that “The Communitarian Impulse” is a profoundly important outgrowth of Rand’s moral vision. In a passage highlighted in this last chapter of my book, Rand portrays, in a single instant of time, her ideal of the human community. In her novel, The Fountainhead, architect Howard Roark is on trial for having destroyed a public housing project. As he prepares for his self-defense, he stands before his peers. Rand ([1943] 1993) writes:

“He stood by the steps of the witness stand. The audience looked at him. They felt he had no chance. They could drop the nameless resentment, the sense of insecurity which he aroused in most people. And so, for the first time, they could see him as he was: a man totally innocent of fear. The fear of which they thought was not the normal kind, not a response to a tangible danger, but the chronic, unconfessed fear in which they all lived. They remembered the misery of the moments when, in loneliness, a man thinks of the bright words he could have said, but had not found, and hates those who robbed him of his courage. The misery of knowing how strong and able one is in one’s own mind, the radiant picture never to be made real. Dreams? Self-delusion? Or a murdered reality, unborn, killed by that corroding emotion without name —fear — need — dependence — hatred? Roark stood before them as each man stands in the innocence of his own mind. But Roark stood like that before a hostile crowd — and they knew suddenly that no hatred was possible to him. For the flash of an instant, they grasped the manner of his consciousness. Each asked himself: do I need anyone’s approval? — does it matter? — am I tied? And for that instant, each man was free — free enough to feel benevolence for every other man in the room.” (678–79)

Ultimately, it is this exalted moment of human benevolence that Rand’s project seeks to universalize.

Burton, Jamie. 2021. Where M’s touching tribute to James Bond at the end of No Time to Die originates from. Newsweek (9 October). Online at: https://www.newsweek.com/m-quote-james-bond-no-time-die-ending-1634622.