Decentralization and Economic Coordination, Feature Articles, Mutual Exchange
The Problem of Scale in Anarchism and the Case for Cybernetic Communism
Aurora Apolito | June 25th, 2020
This is a lead essay in the C4SS Mutual Exchange Symposium: "Decentralization and Economic Coordination." The related readings and list of all other articles can be found in the introduction here.

Note: In order to properly display some of the mathematics in this piece, it’s hosted here as a .pdf. Or, click the image below the introduction.

The problem of scale is perhaps the most fundamental problem of anarchism.

We all know by direct experience that anarchism works well on a local scale. Most people who have been active in the anarchist movement have also participated in at least some initiatives such as Food-Not-Bombs, infoshops, small publishing houses, anarchist bookfairs, mutual aid initiatives, Antifa, worker-owned cooperatives, street medics, hacker and maker spaces, etc. The anarchist movement has a huge accumulated historical experience on how to run such local community initiatives. There is little doubt that anarchism works on what I will refer to as “the small scale”.

Historically, one of the main forms of criticism levelled against anarchism has been that it does not provide a convincing theory of how a decentralized, non-hierarchical form of organization can be scaled up to work efficiently on “the large scale”. This objection has often been voiced by socialist and communist militants who advocate forms of planning centered around a party structure and/or a state organization. Famously, Leon Trotsky in his autobiography commented on how his early enthusiasm for anarchism cooled when his anarchist comrades were unable to provide a good plan for how to run the railway system. Trotsky’s writing was disingenuous, but the question is legitimate. How does anarchism handle large scale structures? Is there a good scaling strategy that interpolates from the small to the large? Although one can certainly envision several good answers to the specific railway problem, the more general problem of scale is highly nontrivial: it is well known that many physical systems are not scale-free and break down outside of a typical scale of applicability. Is anarchism such a system, destined to only work in the scale of small local communities? 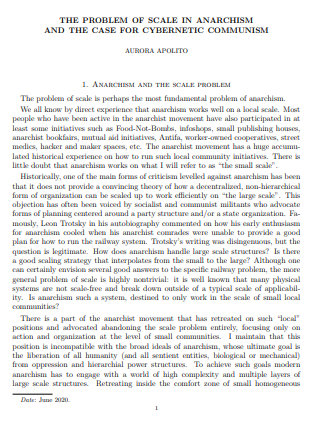