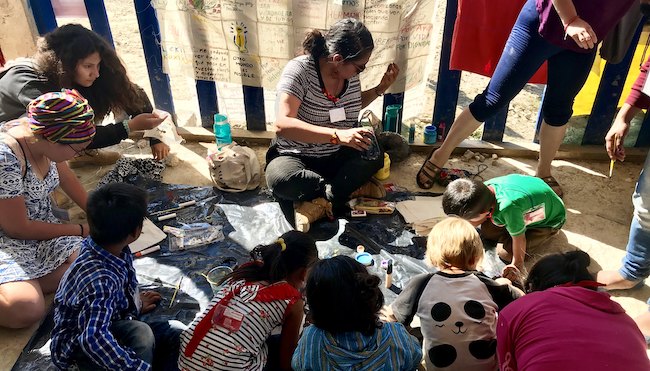 Democracy Is Awful and We Need It for a Ton of Stuff
Emmi Bevensee | Support this author on Patreon | May 3rd, 2019

Democracy1, a sluggish and painful example of attempted cooperation, is often a heap of flaming garbage. Obviously, the “democracy” of the Zapatistas or Rojava are far different than that of the US, but self-styled democracies also elected Bolsonaro, Trump, and Hitler. Aside from things like democracy’s potential for corruption and inherent efficiency throttles, it forces people to either (impossibly) know about everything or (more likely) to have a stake in things they know little about and are not best suited to determining for each other. And yet, the alternative is seemingly just factionalism and reliance on “experts.” These trusted experts form cults of personality and vanguards to protect their privileges. They strengthen their internal ties at the expense of others, coupling economic and other incentives to create and maintain ivory towers and good ol’ boys networks. Democracy is really bad. It brings out the worst in us. We control each others’ lives and we’re bad at it because no one can possibly know everything they need to know to be rulers of each other. But here’s the kicker. Although we can dream far greater than democracy as it’s currently conceived, we still need down-to-earth methods for cooperation on a bunch of things in the short and long-term. We need to organize our movement ethically. We need to plan our date-night. We need to make global changes that involve buy-in from huge masses of people. We rely on large and small scale cooperative democratic processes to stave off a bunch of worse possibilities despite the inadequacies of these mechanisms.

Let’s face it. Our lives are deeply interdependent. The networks in our brains aren’t even totally separate from each other as we influence each other’s thoughts, feelings, choices, and ultimately memories. But nonetheless our individual sphere, ourselves, is an important concentration of knowledge and control. So, our selves are myths, but they teach us about the world. Similarly, our communities, big or small, are lies, but they allow us to get closer to one another and leverage the potential of our interdependence through cooperation.

We could always sabotage each other, and we do, both on purpose and on accident — thanks to the gaps in knowledge inherent in collective decision making. But nonetheless, we still have to face some problems collectively, because they are so complicated that no one person or core vanguard could possibly know enough to solve them. It’s just structurally impossible. We need huge amounts of people thinking together to even attempt to minimize the wide-scale destruction of something like climate change. We can hope for expert enterprises and scientific advances at the margins to make sustainable living more palatable for the masses, but no individual or small group effort is going to solve the problem alone. So because of that need for massive collaboration in things like planet-wide emergency relief, mutual aid networks, and infrastructure, we have no choice but to damn ourselves to the traps of group decision making and the mental shortcuts that come with inefficient modes of mass coordination. For example, working within any collective identity can lead to clique-ish ingroup preferences which miss the point of larger transformations. But this is the risk of any form of bonding, much less collective action. So, even though organizations are inherently plagued by problems intrinsic to their very structure, we still need to figure out how to use them in the most effective and ethical ways possible.

Even if liberal-democracy is 278th on your list of ideal governments, it should still be above fascism. Although statist liberal-democracy is horrifyingly bad, and so much worse than what we could build for each other, it is still better than a lot of other things, for example: authoritarian right-wing regimes (Pinochet, Bolsonaro, or in weaker form, Trump) or red-brown populist dictators (like nazis with communist economics, or in weaker form, Assad or Putin). It makes sense to prioritize efforts to transcend awful things like dictatorship and populism even while building beyond the prevailing liberal order.

So, we need to find a way to move forward without preserving exploitative, imperialist, capitalist democracy. We will work to destroy it and transform its evils. However, we must also simultaneously protect basic things like the vague international prohibition on torture, or whatever pretense of accountability that does exist for police (however widely flaunted). As bad as it is in the US, proper self-actualized fascism can make it so much worse. Fascism could make the US or any nation exponentially more miserable than its current degree of not-fascism. Also, because fascism and authoritarian centralism actively repress complex grassroots coordination or even truth-telling in general, these structures obscure their own ability to prepare for coming existential threats like climate change. When you suppress complex cooperation with heavy-handed centralist violence, you can’t create complex solutions. This is why no one wanted to be the one to tell Stalin the truth about anything and why the CIA never expected Chinese troop movements into Korea. “Whoops! We threw all the physicists in prison for their bourgeoisie/Jewish formulas and the ones that escaped went to work for our enemies!” We don’t just need complex coordination though, we also need ethical complex coordination.

For the things that we need collective decision-making for, such as what our crew should eat for dinner after a hangout, we need to get better at making those decisions ethically. That means we have to do the hard work of building horizontal collective intelligence and feedback mechanisms while at the same time undermining the types of mental viruses that lead to dangerous in-group dynamics. We need to make friends and also not place our friends above other people that we don’t know. We also need all of those people we don’t know in order to solve the complex problems we all face.

Democracy is a sad stand-in for working in groups with overlapping affinity networks. It’s tepid, but there’s something like it that we have to do better or we will fail to meet our challenges. I’m not advocating for more meetings or endless consensus hell, but there’s really no short term way around that for many things. Aside from all the corrosive social capital style politics of groups, organizations, or movements, these forms of organization do have a lot of potential.

For the things that cannot be solved by individuals working alone, in tight crews, or expert vanguards (which is most things), working together to varying degrees can help us to scale up our positive impact. We can work together to create non-zero sum environments for ourselves and others that encourage further cooperation. In working together to build feedback loops of positive reputation we can create a safer and more rewarding environment in which others can engage in meta-cooperative behavior. This can be witnessed to some degree in the sort-of mutualist style coordination of networks like Enspiral and the horizontal decision-making tools to emerge from it such as Loomio but also just in the long and messy history of anarchist organizing.

Better cooperative networks can soften the short-term risks and strengthen the advantages that come with meta-cooperation. For example, a group of people pooling their money in a savings pool, and co-budgeting its allocations and norms, can allow each other to pay off predatory credit debt (YOU AND YOUR BUDS CAN BUILD A SAVINGS POOL!). This softens the risks and difficulties of paying something off individually while strengthening the collective power of the network simultaneously. This is basically a form of unionization against capitalism writ-large (with all the problems of unions in tow). But it isn’t just economic. Groups practicing emotional anarchism and feelz mutual-aid can make the risks of others healing softer, and the benefits of support greater. Together these all take the form of micro-solidarity. So, while the local is a lie like any collective identity, it’s an arena that we know intimately and in which we are able to make better decisions, and it’s small enough that we can avoid the coordination problems of scaling. All of these forms of mutual-aid can couple with the kind of radical direct action that many networks and individuals do in order to maximize the net-collective benefits of these kinds of micro-social advances.

By getting better at working together on the things we must at the level of micro-solidarity, we are able to test and practice ethically scaling that complexity to larger and larger problem-solving or relative abundance creation. Because of course, for every difficulty transformed, there is also a possibility of ratcheting up our networked freedom and agency too. That means that it is possible to not just beat big problems, but also gain the benefits of having figured out meaningful solutions. The benefits of increasingly large and swarming networks are that we get the chance to popularize and test new ideas together with relative safety and consent. But at the level of earth itself, it’s trying to thread the finest needle with 7 billion hands and countless other sentient and non-sentient forces alike. This tension between needing cooperation and it being intrinsically difficult applies at every scale, from the self, to friendships, to crews, to networks, to the planet, and to the galaxy. We need to set each other up for success at every level!

Building a solarpunk future doesn’t only start at the local, it starts at every level all at once. Connections teeming through the spread of new practices and ideas. The vitality of cooperation is vibrant even while we stare-down its risks of failure through the profound inherent difficulties that plague it. So we don’t grunt like cavepeople with our imaginary ingroup of perfect interconnectedness, we reach across and out with humble and audacious hands. We support each other in our in-group to safely betray our preference for each other to share and scale our successes. That’s the only way we can do this thing.