You can donate to Chelsea Manning’s legal fund here.

“[I] will accept whatever you bring upon me,” Chelsea Manning told a judge before being jailed for refusing to testify to a grand jury, mostly likely concerning her heroic efforts at leaking American war crimes almost a decade ago. Grand juries are secret hearings designed to rig the game in favor of the prosecutor and against the accused. As recently as 2012, the state tried to use grand juries to crack down on people with ties to the anarchist community. Despite the impossibly terrible situations that are forced upon people, cooperating with these secret hearings violates the basic trust of people in radical communities.

Manning took a brave moral stand today because she understands that.

She also understands the risks. When Manning was originally imprisoned, she was locked away for 23 hours a day in tortuous conditions and had tried to commit suicide twice. The military kept her in a male prison, though eventually permitted her access to some gender-reaffirming treatments thanks to pressure from the ACLU’s Chase Strangio. Later, despite an outside psychologist’s recommendation, they denied her the freedom to feminize her appearance by growing her hair long. Trump’s transphobic military policies are not likely to improve her treatment upon return.

Imprisonment is torture. Prisons hide humans away from society in warehouses of violence and sadism. No one deserves to be imprisoned. Least of all Chelsea Manning.

Manning’s lawyers asked the judge to confine her to her home because of medical complications, but he said U.S. Marshall’s could handle her care.

What an evil piece of shit.

She stood up for us. Now we need to stand up for her.

If you want to help fund her legal fees, donate here. The Center will match $250 in funds.

If you want to write her letters, here’s how: 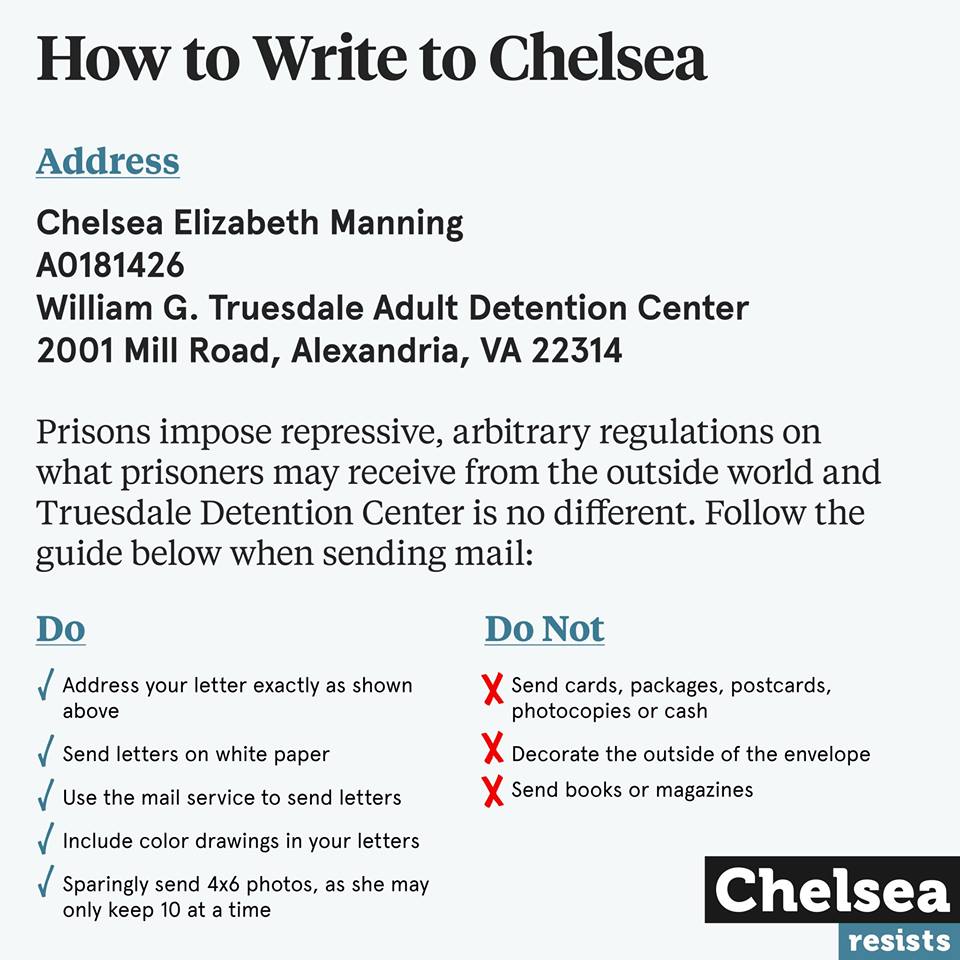 If you would like to write letters to more prisoners, you can find out how here.

Before being confined, the unfailingly charismatic Manning told her lawyer, “This ain’t my first rodeo.” While we provide support and hope for a swift end to her second rodeo, we should all remember some of her important wisdom.

The state is officially torturing Chelsea Manning under UN standards.

“We condemn the solitary confinement that Chelsea Manning has been subjected to during her incarceration at William G. Truesdale Adult Detention Center.

“Since her arrival at Truesdale on March 8th, Chelsea has been placed in administrative segregation, or ‘adseg,’ a term designed to sound less cruel than ‘solitary confinement.’ However, Chelsea has been kept in her cell for 22 hours a day. This treatment qualifies as Solitary Confinement.

Chelsea can’t be out of her cell while any other prisoners are out, so she cannot talk to other people, or visit the law library, and has no access to books or reading material. She has not been outside for 16 days. She is permitted to make phone calls and move about outside her cell between 1 and 3 a.m..

As today is Day 16, Chelsea is now in “Prolonged Solitary,” as defined by Juan Mendez, UN Special Rapporteur on Torture:

“I have defined prolonged solitary confinement as any period in excess of 15 days. This definition reflects the fact that most of the scientific literature shows that, after 15 days, certain changes in brain functions occur and the harmful psychological effects of isolation can become irreversible. Prolonged solitary confinement must be absolutely prohibited, because it always amounts to cruel, inhuman or degrading treatment, and may even constitute torture…”

The jail says keeping ‘high-profile’ prisoners in adseg is policy for the protection of all prisoners, but there is no reason to believe jail officials view Chelsea as either a target or a risk. If Truesdale wants to prioritize Chelsea’s health and welfare, as they consistently claim, then they should make sure she is able to have contact with other people in the jail.

We have worked to monitor Chelsea’s well-being since her arrival at Truesdale. In her first week she contracted a bacterial infection which has since been resolved by antibiotics. More recently, she experienced the shift between the prolonged under stimulation of 22-hour lock-down and a 45-minute social visit as so jarring that she threw up.

Although the facility has accommodated Chelsea’s medical needs, including hormone medications and daily post-surgery treatment, keeping her under these conditions for over 15 days amounts to torture, possibly in an attempt to coerce her into compliance with the Grand Jury. The Mendez Report notes this tactic: ‘I have observed that solitary confinement … is often used as a deliberate method to obtain information or confessions. In such conditions, confinement amounts to a coercive tool and constitutes a cruel, inhuman or degrading treatment, and possibly torture.’

Chelsea is a principled person, and she has made clear that while this kind of treatment will harm her, and will almost certainly leave lasting scars, it will never make her change her mind about cooperating with the grand jury.

It bears repeating that while solitary confinement should not be used for anyone, it is especially immoral to place Chelsea in solitary, when she has not been accused of, charged with, nor convicted of any new crime.