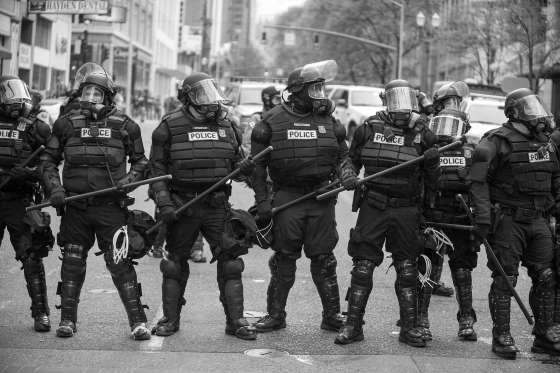 Portland Must Be Done with The Oregonian
William Gillis | @rechelon | Support this author on Patreon | May 10th, 2017

Last Friday, The Oregonian published a staff editorial that responded to the police brutality unleashed on May Day protesters by labeling all anarchists as “punk fascists.” This editorial — published by the conservative newspaper that used to be a daily powerhouse in the Northwest — has been roundly denounced in many circles for its political ignorance, opportunism, and misrepresentation of the facts. While some participants in the black bloc chucked Pepsi cans at alt-right provocateurs and the cops, the Portland police — infamous for rehiring officers exposed as neonazis — were the clear aggressors, as is the inherent nature of police.

They responded to the minor actions of a few by brutally attacking the entirety of the march: including families and the disabled. In the resulting chaos as police beat, gassed, and chucked grenades at protesters, some members of the black bloc responded by smashing bank and corporate windows, and a fire was set in an intersection as an impediment to slow the attacking police down. The Oregonian‘s attempts to portray all anarchists as responsible, and furthermore as “fascists,” is beyond atrocious. One cannot help but juxtapose this narrative with the police’s friendly approach to (and the media’s craven positive coverage of) white nationalists who marched through a poor immigrant neighborhood in outer East Portland two days prior.

The Oregonian, in its baiting rhetorical manner, demanded to hear from anarchists. The following is but one of many letters to the editor submitted by anarchists from Portland and around the world. Of course, it is highly doubtful The Oregonian will print a single one:

How fitting that The Oregonian would use a holiday internationally recognized in commemoration of eight anarchists unjustly prosecuted and convicted in 1886 to launch its own half baked crusade. May Day has always been primarily an Anarchist holiday, in remembrance of our role as organizers in the Labor movement that normalized the 8-hour day, and anarchists have always marched on May Day in a variety of organizations and capacities.

The Oregonian, on the other hand, has long served as a running dog for the Police and the Business Alliance, aggressively twisting public narratives to benefit and shield them. This week, it has truly lived up to this tradition in its laughable attempts to paint anarchist participants in the march as uniform, the police not as violent instigators of collective repression but as just responders, and the participants in the black bloc who shielded women and children from police attacks as out to “menace and control” the population.

But of course the job of yellow journalists has long been to push such Orwellian hogwash. In the 1800s you were able to redefine in the public’s mind a word like “an-archy” that literally means “without domination” into somehow meaning “a war of all versus all”. Now open white nationalists armed to the teeth march down 82nd sieg heiling and shoving black residents and you report it as a “free speech march”, happily drumming up a single preposterous anonymous threatening email that sounds like no actual leftist on the planet. Freedom is war. Racist thugs are civil libertarians. Self-defense is unilateral aggression.

Establishment rags like The Oregonian have pushed such lies, happily repeating anything the cops claim as fact, since long before I was born here in Little Beirut. But now people are waking up. “The Tale of Two Marches” last weekend has been truly illustrative. Open neonazis are normalized and embraced as merely “Trump voters”, while actual defenders of liberty must remain masked at marches lest they be exposed and gunned down in the streets of Portland like anti-racist activist Luke Querner was in 2011.

It’s no surprise The Oregonian cares more about a few broken windows and a small fire started than resisting actual attempts to menace and control. Nor is it any surprise they attempt to paint those who engage in misdirected attempts at resistance while being shot and beaten by the cops as “fascists” to dilute the term and provide cover for a real authoritarian police state and real white nationalists. But enough is enough. Portland must be done with The Oregonian.

William Gillis,
Coordinating Director of The Center for a Stateless Society