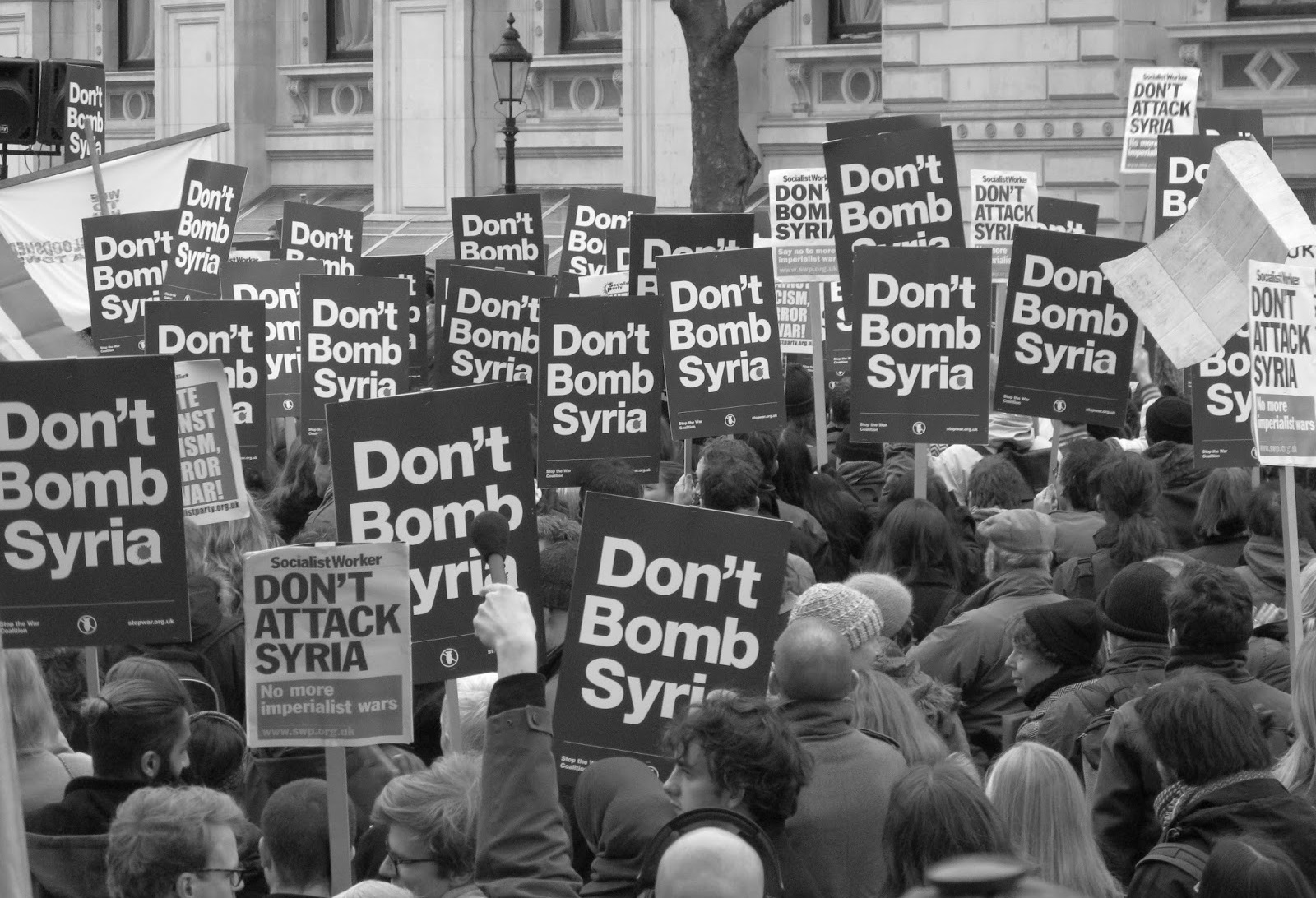 On the night of April 6th 2017, the United States launched 59 Tomahawk cruise missiles at Syria. This was an attempt at retaliation and deterrence after Syrian dictator Bashar al-Assad launched a chemical weapons attack against the Syrian people. Acts of war in the Middle East (and elsewhere) by the United States under the pretense of humanitarianism and spreading democracy are nothing new. The history of U.S. military action in the Middle East is convoluted and complicated, and clearly has nothing to do with humanitarianism or spreading democracy. To understand what happened and why, it is time for a history lesson.

The popular narrative frames September 11th 2001 as the beginning of contemporary U.S. foreign policy in the Middle East. This narrative portrays the U.S. in a forgiving light: simply responding to an unprovoked attack by evil Muslims that “hate us for our freedom.” Reality paints a significantly less forgiving picture.

After World War II ended, the United States’ enemy shifted from Nazism and Fascism to Communism, and particularly the Soviet Union. In the years leading up to the fall of Nazi Germany, large quantities of oil were discovered in the Middle East. As a consequence, both remaining world superpowers had an interest in securing as much influence and power in the Middle East as possible. Britain’s diminished presence in the region left what was viewed as a “vacuum of power”: one that needed to be filled by Westerners if stability was to be achieved. Today’s enemy may be called Islamic extremism and terrorism, but the name of the enemy is the least significant part of the war. The true motive underlying all United States intervention overseas, and especially in the Middle East, is power.

In 1947, the United States helped push through a UN resolution that turned Palestine into two states, establishing Israel as a nation. This imposition led to the Arab-Israeli War, forcing 700,000 Palestinian refugees from their homes – the first of many U.S.-backed refugee crises in the region. The U.S. succeeded, however, in establishing a non-Islamic majority state in the region, securing a Western foothold and “humanitarian cause” for years to come. Since then, the U.S. has provided over $125 billion in foreign aid to Israel.

In 1949, the United States backed a coup in Syria, ousting the country’s elected government and establishing a military dictatorship. Why? The U.S. feared that the weaker existing government in Syria may empower the Syrian Communist Party. The coup led to years of political turmoil and unrest, slowing down only in 1970 when Assad seized power. The U.S. then took a detour from Syria, instead focusing on engineering regime changes in other countries.

In 1953, after the Iranian government nationalized the British Anglo-Iranian oil company, the CIA similarly overthrew the Iranian government – also democratically elected – replacing it with the Shah who ruled as a ruthless dictator. In 1976, Amnesty International reported on the state of human rights in Iran under the Shah, lambasting the arbitrary arrest of suspected political opponents and the use of torture, executions, and unofficial deaths (but at least he wasn’t a communist!).

After U.S.-friendly King Faisal II in Iraq was overthrown in 1958, the U.S. supported a 1963 coup by the right-wing Ba’ath party, giving them the names of Iraqi Communists to murder. The party was ousted later that same year, until a second coup in 1968 put the Ba’ath party back in place. The party was soon led by Saddam Hussein, who went on to murder thousands of Communist Party members in the country. In 1973 (after Iraqi oil was nationalized), the U.S. shifted support to back Kurdish rebels, providing them with $16 million in weapons and promising to back them in their rebellion. The underlying goal, however, was to destabilize the country during a border dispute with Iran. When Iran and Iraq reached an agreement in 1975, Iraq proceeded to violently suppress the rebellion and the U.S. ended their support for the rebels. The ploy to back and then abandon the Kurds was orchestrated by none other than Henry Kissinger.

In 1973, a nationalist coup in Afghanistan removed the King. This coup was shortly followed by a revolution that put the Stalinist People’s Democratic Party in power, supported by the Soviet Union. To counter growing ties between Afghanistan and the Soviets, the U.S. covertly funded Islamic Fundamentalist rebels: the Mujahideen. The Soviet Union responded by sending armies into Afghanistan to back the Afghan government. These rebels paved the way for Taliban rule in the country, and their training camps (funded by the U.S.) later became “terrorist training camps.” The preceding Soviet-backed government was secular, whereas the Mujahideen and Taliban rule that followed enforced strict Sharia law. Yes, it was the United States that implemented Sharia law in Afghanistan.

In 1978, revolution broke out in Iran. The United States urged the Shah to violently suppress protests, leading to the massacre of protestors in Jaleh Square in Tehran. The Shah was overthrown and replaced by the Islamic Republic headed by Ayatollah Khomeini. When Iraq invaded Iran in 1980, the U.S. seized the opportunity to weaken the two regimes and intervened on both sides to extend the conflict – perhaps the approach they are now trying in Syria. The U.S. openly supported Iraq during the war and covertly supported Iran via Israel, providing both sides with funding and arms. Throughout the war, Iraq used chemical weapons on Iran against military personnel and civilians alike with the support of United States. These chemical weapons were not unlike those allegedly used in Syria. In 1987, the U.S. sent an armada to the Persian Gulf to better provide arms to Iraq. Saddam Hussein continued to use chemical weapons throughout the 1980s against Kurdish rebels in the country without condemnation.

It was not until the Persian Gulf War, a few years after a ceasefire began between Iraq and Iran, that the U.S. condemned the use of chemical weapons in Iraq, stating that the world could no longer wait for action. The Persian Gulf War usefully coincided with the fall of the Soviet Union in 1991. As the Soviets became weaker, the United States needed a new enemy to justify its ongoing military presence in the Middle East. After Iraq invaded Kuwait in 1990, the U.S. launched Operation Desert Storm. The United Nations, as urged by the U.S., imposed severe economic sanctions on the country, which persisted long after the war. These sanctions led to mass starvation and death by treatable disease. Overall, the Persian Gulf War killed 100,000 to 200,000 Iraqis. Congress passed the “Iraq Liberation Act” in 1998, which stated that “It should be the policy of the United States to support efforts to remove the regime headed by Saddam Hussein from power in Iraq.” The act gave approximately $100 million in aid to groups attempting to overthrow Saddam Hussein. The act was later used to justify the 2003 U.S. invasion of Iraq. How convenient.

The September 11th 2001 terrorist attacks, which killed 3,000 people, temporarily redirected the U.S.’s focus back to Afghanistan. Just three days after the attacks, Congress authorized “all necessary and appropriate force against those nations, organizations, or persons [the President] determines planned, authorized, committed, or aided the terrorist attacks that occurred on September 11, 2001, or harbored such organizations or persons, in order to prevent any future acts of international terrorism against the United States by such nations, organizations or persons.” In October of 2001, the Patriot Act was signed into law and the bombing of Taliban military installations and terrorist training camps began, quickly leading to the installation of a U.S. puppet regime in the country.

In 2002, Donald Rumsfeld (then-Secretary of Defense) charged the newly-created Office of Special Plans with the task of finding evidence tying Saddam Hussein to Al Qaeda – a connection the U.S. desperately wanted to exist. No such connection existed, but the vaguest hint that Hussein might have been developing Weapons of Mass Destruction (now known to be completely false) was enough for the U.S. to launch a full-scale invasion of Iraq in 2003.

In 2006, Abu Ayyub al Masri established the Islamic State in Iraq (ISI) to oppose U.S. presence in the country and establish a fundamentalist theocratic state. In 2011, ISI operatives moved into Syria to take advantage of the growing instability in the country. The Arab Spring of 2011 – a period of several uprisings throughout the Middle East – had recently come to Syria. In March of 2011, Assad’s security forces killed protesters in Deraa that were demanding the release of political prisoners. Several anti-regime protests followed as the U.S. and European Union tightened sanctions on the country. In 2012, the National Coalition for Syrian Revolutionary and Opposition Forces was formed in Qatar and formally recognized as a representative of the Syrian people shortly thereafter.

The U.S. provided monetary support and arms to the Free Syrian Army to oppose Assad. Those weapons (and bases created with the help money from the U.S.) soon fell under the control of ISI, now known as ISIS: the Islamic State in Iraq and Syria. In 2013, the U.N. concluded that chemical weapons had been used by Assad to quell opposition. These strikes were almost enough for then-President Obama to order a strike against the Syrian government, but Obama changed his mind before the strike was made. A similar strike was finally launched on Syria in 2014, but this time against ISIS, as the group had gained significant ground in the region. The U.S.-backed civil war in Syria between Assad’s forces, ISIS, and rebels that oppose both groups has caused a refugee crisis with approximately 13.5 million people displaced. The civil war in Syria continues, with the U.S. missile strike against Assad only adding to the ceaseless destruction.

For the past 85+ years, the United States has been orchestrating regime change in the Middle East. Propping up dictators or removing them, crushing democracies or installing them, U.S. intervention knows no rhyme or reason beyond the endless quest to seize power. The identity of the enemy does not matter – just that there is one and that we are fighting it. Overnight, the U.S. government has flipped its ultimate enemy of peace and civilization from ISIS to Russia-backed Assad. The atrocities committed by Assad should not be trivialized, but to pretend that these strikes had anything to do with moral opposition to chemical weapons is laughable. Is the U.S. rekindling its competition with Russia for dominance in the region? Reverting its focus from Islamic extremism to Cold War Era red-scares? Playing both sides to prolong the conflict? Or did Trump just have a bad breakfast? Time will surely tell, but the story will only grow darker as the U.S. government persists in its complete disregard for human life.