If you frequent right-libertarian social media circles, you’ve probably run across — more than once — the popular “World Population Living in Extreme Poverty, 1820-2015” meme. It’s a graph that shows high levels of absolute poverty relative to the total world population through the mid-20th century, with a rapid increase starting about 1950 in the share in the population not in absolute poverty, and a rapid quantitative decline of the absolute numbers in poverty from the mid-70s on. 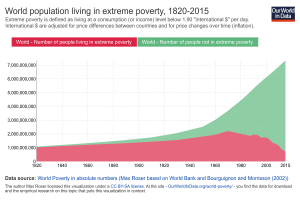 The latest iteration of the meme I was exposed to was from the Facebook page of Peter St Onge, one of the usual suspects at Mises.org. He accompanied it with the comment “See, now, this is why global capitalism must be smashed…”

As a defense of capitalism, this is roughly comparable in stupidity to the “Lookit! People with iPhones tweeting #ResistCapitalism!” meme that circulated a few months ago. To begin with, even taking the data at face value, the argument is nonsense. As with most capitalist apologetics, St Onge and others circulating this meme don’t even seem to know what it is they’re defending: is it actually-existing global capitalism, or free markets as such. The idenfifying characteristic of vulgar libertarianism is that it alternates between conflating corporate capitalism with the free market and distinguishing between them, from one moment to the next, without even acknowledging the little dance that they’re doing. Even right-libertarians at least tip their hats to the existence of “crony capitalism” or “corporatism.”

Just as a matter of documented historical fact, it’s indisputable that capitalism — in the sense of the actual historic system of political economy that succeeded feudalism five or six hundred years ago — had its origins in massive robbery and enclosure of most of the earth’s land and mineral resources, and continues to get the overwhelming bulk of its profits from rents on state-enforced monopolies, entry barriers, enclosures and subsidies. The present system, both in its origins and its present structure, in no way even remotely approximates a free market. It is a system of massive state subsidies and massive state-enforced monopolies, all in defense of enormous concentrations of stolen property and continuing guaranteed returns on that stolen property.

So St Onge and those of their ilk are left with one of two options. Either 1) All that robbery and continued state-enabled wealth extraction is an essential prerequisite of economic progress; or 2) There has been a reduction in poverty DESPITE the capitalist extraction framework, from all the productivity it DIDN’T manage to enclose and rob. Which means the real source of productivity was people’s skills and horizontal relationships — what David Graeber calls the “everyday communism” of cooperative labor by ordinary people, that exists in the interstices of both corporate and state bureaucracies– and capitalism just parasitized on that.

As Arthur Chu once put it, “Capitalism didn’t produce anything. Goods and services are produced by labor. What capitalism and other -isms do is determine how the product is distributed.”

The best you can say for capitalism, even taking that stupid meme at face value, is that even after massively robbing (and sometimes exterminating or enslaving) the whole world, and continuing to extract rents from us right up the present, capitalism still refrained just enough from disrupting our horizontal relationships and let us keep just enough of the fruits of our cooperation and productivity, after it robbed us, to experience some increase in our standard of living.

No doubt some of you right-libs are already saying “But all that stuff is crony capitalism (or corporatism) — not capitalism yada yada yada!” Fine. But what Onge praised for the purported increase in prosperity was actually existing capitalism, not some idealized free market. You cannot — as I’ve argued before (“When is Capitalism Not Capitalism?” C4SS, Jan. 14) — give actually existing capitalism credit for good stuff while defining the atrocities and crimes of actually existing capitalism out of it. But that’s what most right-libertarian pro-capitalist apologetics do. According to them, “capitalism is the source of everything good in the world — but also something that never existed. And [the argument] switches repeatedly back and forth from one to the other, every couple of sentences….”

You either defend actually existing capitalism — and admit to the bad along with the good — or you defend free markets. One or the other. You can’t keep hopping back and forth between them.

But even the data itself, which purportedly shows a drastic drop in levels of absolute poverty, is meaningless. The metrics for “absolute poverty” are based on the size of the money economy, so anything that results in a shift of economic activity from the non-money economy to the cash nexus will show up as an increase in per capita income regardless of whether actual consumption of physical goods increases at all — or whether it in fact decreases.

Take the example of a capitalist landlord enclosing village communal land to which peasants have customary property rights, or likewise robbing them of access rights to common pasture, wood or fen. Rather than directly producing sustenance for themselves, outside the money economy, these peasants are forced to perform wage labor for the landlord who has enclosed the land, or — if they are evicted — to enter the urban wage labor market. Then they must buy food for themselves on the cash nexus. This shows up both as an increase in GDP and a drastic increase in the money income of the people who were robbed — in other words, a reduction in absolute poverty — even though the victims are working harder for less food and shelter than they were previously obtaining outside the cash nexus. In other words, the metric treats Bastiat’s “broken windows” as an increase in prosperity.

What’s more, the data itself has been doctored for political reasons. The UN Millennium Campaign, the source of the data for that stupid meme, tweaked the definition of extreme poverty until it massaged the numbers to get the results they wanted (Jason Hickel, “Exposing the great ‘poverty reduction’ lie,” Al Jazeera English, Aug. 21, 2014). They lowered the ceiling for “extreme poverty” until they showed a decrease in the number of people under that ceiling — as opposed to an increase under the previous ceiling.

People like St Onge, by going to such great lengths to defend the record of actually existing capitalism — while posing as defenders of the “free market” — reveal what they’re really about. Early classical liberals like Smith and Ricardo were to a considerable extent genuine radicals, critically analyzing the economic power of the great landed and mercantile interests. But with the political triumph of the industrialists in Britain in the early-middle years of the 19th century, the mainstream of classical liberalism was coopted by the newly dominant class interests, and became what Marx called “vulgar political economists,” or “hired prize-fighters” on behalf of capitalism. They used “free market” rhetoric to defend a statist system of power. And this is true of the main body of the libertarian movement right up to the present day.

Fortunately significant radical classical liberal critiques have persisted, as a minority current within the larger body of libertarianism, and continued to engage in free market crtiques of capitalism as a class system. In the nineteenth century Thomas Hodgskin, Henry George, and the American individualists produced incisive free market anti-capitalist analysis, and continued through the twentieth as exemplified by Bolton Hall, Franz Oppenheimer and Ralph Borsodi. Center for a Stateless Society, the think tank i write these commentaries for, is a leading contemporary example of this radical tendency.

In the end, you can defend capitalism — the nexus of capitalist class interests, with their piles of stolen loot, and the state — or you can defend free markets. You can’t do both.