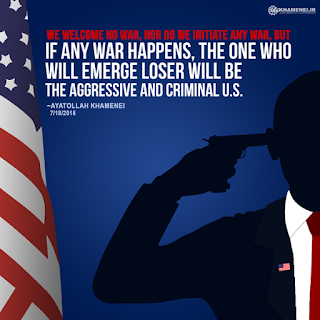 This image tweeted by Iran Supreme Leader Ayatollah Ali Khamenei has a lot of people upset. Is it supposed to be Barack Obama holding a gun to his own head?What if it is? The picture is hardly threatening or aggressive in any way. After all, it’s not a picture of Khamenei holding a gun to Obama’s head.

And look at the text:

We welcome no war, nor do we initiate any war, but if any war happens, the one who will emerge loser will be the aggressive and criminal U.S.

That is not aggressive in the least. On the contrary, it rejects war. Who’s been threatening war against whom? The U.S. government (along with Israel) has been threatening war against Iran. Even after the nuclear agreement was signed, Secretary of War Ash Carter reiterated that war against Iran is still an option. So all Khamenei is saying is that if the U.S. government starts a war, it will lose. It will be as though Obama had pointed a gun at himself and pulled the trigger.

In the past, Iran’s pledges to retaliate if attacked have always been presented by the news media and politicians as though they were threats to initiate war. This is happening again.

When will the media and the hack politicians be straight with the public? Iran has threatened to attack no one, but the U.S. and Israeli governments, both with nuclear weapons, routinely threaten to attack Iran. Who is the criminal?