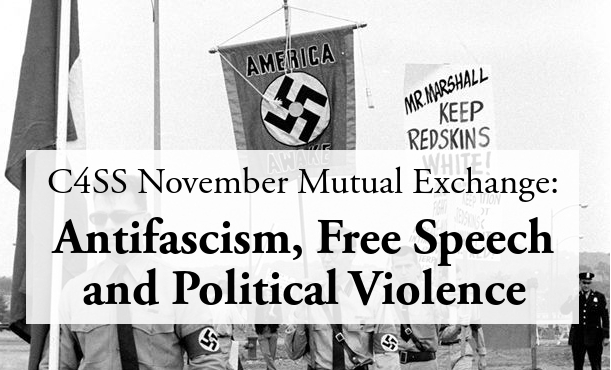 A Pacifist’s Take on Punching Nazis
SummerSpeaker | December 4th, 2017
This is the tenth essay in the November Mutual Exchange Symposium: Freedom of Speech and Political Violence

In this piece I ask readers of whatever anti-fascist persuasion to contemplate critiques of stereotypically violent no-platforming as well as defenses of that controversial practice. Though I’m personally guided by a utopian vision of anarchist nonviolence, I’m not convinced popping Richard Spencer in the face conflicts with this dream. It’s a long slog from here to there. I promote pluralism in the struggle against fascism and all authoritarianisms.

Strict pacifists, those who entirely eschew killing or physically harming humans and perhaps other feeling beings, of course have serious trouble against non-pacifist opponents. At current tech levels, strict pacifists have limited options to stop a ruthless adversary. How do strict pacifists avoid getting imprisoned or simply shot? For this reason and others, I can’t advocate strict pacifism, as much I’m drawn to the ideal.

As Errico Malatesta famously wrote, “there can be no doubt that the Anarchist Idea, denying government, is by its very nature opposed to violence.” All (or at least most) anarchists hope to abolish coercion, to achieve genuine liberty for everyone. Engagement with the world that actually exists entails compromise– recognition of the distance between where we’re at now and what we wish to create. The vexing question is how to optimally progress toward freedom in a manifestly un-free and violent society.

While narrow interests such as status competition and social climbing frequently influence one’s approach to combating fascism, here I explore various anti-fascist strategies from a consequentialist framework focused on fostering maximum freedom for all.

To bash-the-fash anarchists, respect-the-NAP libertarians, committed pacifists, and curious liberals alike, I want to emphasize uncertainty. Assessing the effect any given action has on our massively complex network of human connections isn’t easy. I consider compelling both arguments in favor of forcibly no-platforming fascists and ones against this approach. I encourage all anarchists and others opposed to fascism to do the same. Assuming any group or individual has the definitive anti-fascist tactic or strategy strikes me as wildly overconfident. Regardless of what you think about the merits of excluding fascists from the public sphere and the marketplace of ideas, I recommend interactions based on the spirit of intellectual charity and being excellent to fellow anti-fascists in a broad sense.

Because of my affinity for pacifism, critiques of no-platforming and the shaming, harassment, and physical force at times associated with it intuitively resonate with me. In theory, I don’t want such coercive tactics to shape what people think or how they act. I don’t personally enjoy being bullied or beaten, so why would I want to do those things to others? Shouldn’t people determine what’s true and what best serves the their interests and the common good without stifling social pressure and employing naked force?

As sundry liberals and libertarians point out, the policy of assaulting or killing fascists potentially leads to an authoritarian spiral due to definitional issues and the seductive appeal of coercion. When we say “fascists” and “fascism,” do we mean the proper sense as described by scholars such as Robert O. Paxton or in the expansive colloquial sense?  Anti-fascists who practice no-platforming seem to agree it applies to the entirety of the alt-right regardless of how alt-right folks identify ideologically, up to and including Jared Taylor. But is militant no-platforming additionally applicable to Trump supporters, mainstream conservatives, etc.? Lines blur. After all, mainstream conservatives and liberals alike support structural white supremacy, imperialism, settler colonialism, heteropatriarchy, and so on. There is ambiguity about how wide of a net to cast when using no-platforming tactics. This ambiguity can trace a path to a place where, as Malatesta described, anarchists can claim “hardly less than the right of life and death over those who are not Anarchists, or who are not Anarchist exactly according to their pattern.” It’s not hard to find approximately this position articulated among certain anarchists in online forums.

As understandable as the anarchy-or-die position is, keeping in mind the saying that “extremism in defense of liberty is no vice,” this view clashes conceptually with core anarchist values and provides a welcoming environment for cynical social climbers and petty tyrants. The righteousness of bashing a Nazi (or conservative, or liberal, etc.) for the greater good so easily bleeds into self-righteousness and the joy of inflicting pain and terror, of domination. I personally avoid engaging in violence in part because I fear I would fall into that trap.

On the other hand, as a queer geek, I’ve experienced being an outcast and being targeted by a mob. When I watch videos of anti-fascists bashing some lone individual, I viscerally empathize with the individual and wonder if that could be me next. A friend of mine who sits somewhere between communist anarchism and Leninism received a beating from an anarchist black bloc one time, so it’s not inconceivable. I hold a number of extreme and unpopular views.

The principles of freedom of expression and of information are crucially important for discovering how the reality we jointly inhabit operates. Scientific inquiry has a long history of challenging social systems and people’s identities. If applied too liberally, no-platforming can hinder research and serve as another tool for guarding established conceptual frameworks against new theories.

The most chilling critique of the current anti-fascist tactic of militant confrontation comes out of my monitoring of the alt-right. Mike Enoch and other alt-right folks assert that antifa helps them, that antifa radicalizes white people and brings more recruits to their side. While this claim could be bravado, reverse psychology, or otherwise insincere, it’s imperative that anti-fascists develop ways to assess our effectiveness and make sure our tactics aren’t playing into the enemy’s hands. The narrative of antifa as counterproductive appears routinely in many centrist online forums as well. I doubt all of its proponents are simply playing games. While we can write off some significant number of such centrists as irredeemable or at least extremely difficult to persuade to value freedom in anarchist fashion, it’s likely militant no-platforming repulses some number of centrists who might otherwise prove sympathetic to anarchism. That’s presumably likewise the case with other tactics and while it’s not necessarily a cause to avoid militant no-platforming, it is a factor we should consider.

Because the above, I tend to think it’d be better to engage in mass principled nonviolent action against the state and against fascism, with defensive violence reserved for direct aggression if employed at all. This mirrors the pacifist-anarchist position Malatesta criticized, but functions fantastically in a thought experiment! The masses rise up and dismantle oppression without inflicting physical harm on any feeling being. Let people think and say whatever they want, but prevent them from having the ability to hurt anybody. With enough raw numbers and willingness to take risks, we could shut down or transform the economy and society. No punching necessary.

Needless to say, such a thought experiment passes the bounds of credibility. We’re not anywhere near having that many anarchists and sympathizers. Harassing, shaming, shunning, and/or punching are arguably more practical under the circumstances we find ourselves in. An effective mass nonviolent movement suffers from the collective-action problem and even in the most optimistic scenario; it asks a lot of people. Ostracizing and terrorizing fascists and company, by contrast, stands out as rather convenient and economical. Existing society operates largely via social pressure and the threat of physical force, so we know these methods can condition human thought and behavior. Qualms about coercion should be weighed against the harm fascism causes and could cause. The danger fascism poses to liberty and human well-being cannot be overstated: fascism is truly the antithesis of freedom.

Moreover, the importance of masculine power and success in fascist thought and propaganda makes confrontation and humiliation potentially especially effective. Numerous alt-right and other fascist-aligned appeals involve a narrative emasculation and a promise of virile revival. Confrontation, including violence, can suppress fascism by preventing fascists from plausibly offering victory and glory to would-be recruits. What emasculated man wants to get chased off and/or beaten up by a bunch of antifa queers? That doesn’t help. Militant no-platforming can fuel fascist persecution narratives, which is part of their pitch, but recurring humiliation without vindication isn’t very attractive. While it’s of course true to an extent for all movements, fascism in particular needs to demonstrate success in order to succeed.

The fascist reliance on winning leads to robust practical case for militant anti-fascism that includes no-platforming by force: this approach has a history of keeping fascist organizing at the margins. But stopping fascism alone isn’t the only relevant question. What about how initiating force against fascists and similar violates the non-aggression principle and in doing so contributes to a pernicious cycle of hostility as sketched above?

Here it’s critical to keep in mind that fascism is inherently and necessarily violent. Even if we adopt the most generous possible interpretation of the alt-right, their leaders nonetheless brazenly promote countless forms of state violence: borders, detention centers, deportations, police, jails, prisons, etc. They want to strengthen these already horrific elements of contemporary society. It’s fair to see organizing for this unambiguously violent objective as an act of aggression that merits defensive violence in response. And that’s with the most generous interpretation. There’s plenty of evidence that many on the alt-right want to physically exterminate their enemies. That’s what they “joke” about continually.

“Violence,” Salvor Hardin says in Isaac Asimov’s novel Foundation, “is the last refuge of the incompetent.” I’m skeptical that damaging human bodies via blunt trauma constitutes the very best method of defeating the humans who currently espouse fascism, much less for defeating fascism as an ideology. At least with superior technology, a sufficiently sagacious artificial intellectual could presumably devise an anti-fascist plan far surpassing anything we squishy fleshbags have come up with. But we’re stuck here in the early 21st century, equipped with only crude tools and incomplete data. We’re awfully incompetent at present.

Whatever my concerns about spiraling authoritarianism, I applaud the courage and audacity of anyone physically attacking fascist organizers in the dreams of building a better world. As Mahatma Gandhi wrote, taking violent action against oppression trumps doing nothing.