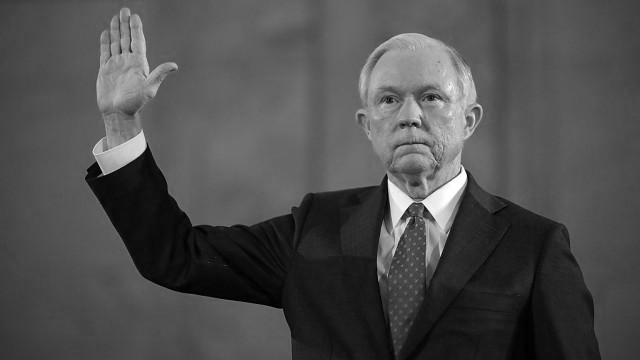 At a recent press conference, Attorney General Jeff Sessions said: “If you want to collect a drug debt you can’t file a lawsuit in court.” This was an attempt to justify his May 12th memo instructing federal prosecutors to pursue the strongest possible sentences for drug offenders, including non-violent ones. It should be obvious to Sessions that legalizing drugs would solve the above mentioned problem, without the ugly side effect of locking more people into America’s nightmarish prison system for trivial “crimes.”

Then again, perhaps this ugly side effect is a feature rather than a bug for Sessions, who has openly supported the private prison industry throughout his career. Two of his top aides have recently moved on to lobby for GEO Group, the scandal-ridden private prison behemoth that donated just under a half-million dollars to Trump’s presidential campaign. Private prison stock has risen sharply as Sessions made his support for federal private prisons and draconian drug policies known. This is also reflected in his orders to increase the prosecutions of undocumented laborers, who undoubtedly will pass through GEO Group’s detention centers.

One cannot escape the irony of the self-proclaimed party of small, limited government behaving as monstrously and intrusively as it can when it’s in power, and in a way that unambiguously benefits its donors. To add further irony to the situation, this comes at a time when support for the legalization of cannabis is at all time high. More and more Americans are realizing that prohibition does not work and never has. The link between drugs and crime, which Sessions complains of, exists only because drug users are forced into a black market where none of the standard legal protections apply. Liquor store owners do not enter turf wars, but prohibition-era mobsters did. The same logic applies to other prohibited activities as well. Laws making non-violent drug activity more risky will make the black markets more violent, not less.

Growing numbers of Americans understand this, but our politics is always behind the times, as the state never manages to shake this “Reefer Madness” mentality, which has no basis in reality. This is also reflected in Trump and Sessions’ rhetoric about crime rates being unprecedentedly high when in fact the opposite is the case, and they have been continuously falling since the 1990’s.

This is not to mention the monstrosity of sending non-violent people into the US prison system, a notoriously violent place, to begin with. Many otherwise peaceful people will be made more violent as a result of their time in prison and this can hardly be seen as a positive outcome.

Millions of Americans use various illegal drugs as means of relaxation, a catalyst for creativity, and as a business opportunity: often in places where they are shut off from other means of making money. The majority of drug users do so peacefully, without causing harm to others. While negative consequences do exist, they are only made worse by prohibitionist policies. Full decriminalization is the only drug policy consistent with a free society.

Reinvigorating the drug war is another instance of our expansive government’s war on personal freedom. It is time to free ourselves from outdated authoritarian thinking and create a future with marijuana in every corner shop and a taco truck on every street.