We’ve been hearing a lot lately about making America “great again” – from a man who seems not to care how many people’s liberty he violates in order to pursue his conception of national greatness.

In this context, I’m happy to announce the Molinari Institute’s latest t-shirt, which features a quotation from Jeffersonian political activist Abraham Bishop, one of the most radical of the American founders:

“A nation which makes greatness its polestar can never be free.” 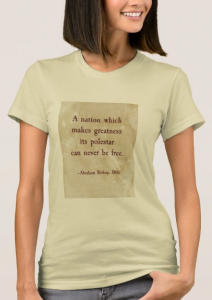 Thanks to Sheldon Richman for introducing me to this line, which comes from an 1800 antiwar speech titled Oration on the Extent and Power of Political Delusion; here’s a bit of context:

A nation which makes greatness its polestar can never be free; beneath national greatness sink individual greatness, honor, wealth and freedom. But though history, experience and reasoning confirm these ideas; yet all-powerful delusion has been able to make the people of every nation lend a helping hand in putting on their own fetters and rivetting their own chains, and in this service delusion always employs men too great to speak the truth, and yet too powerful to be doubted. Their statements are believed – their projects adopted – their ends answered and the deluded subjects of all this artifice are left to passive obedience through life, and to entail a condition of unqualified non-resistance to a ruined posterity.

Bishop’s other works include an attack on church-state unions and a defense of the insurgent slaves in the Haitian revolution (showing himself, in that connection, a better Jeffersonian than Jefferson himself, who sided with the slaveowners). Bishop also championed women’s education and was an early critic of the Constitution. So he wasn’t an anarchist? Well, nobody’s perfect.