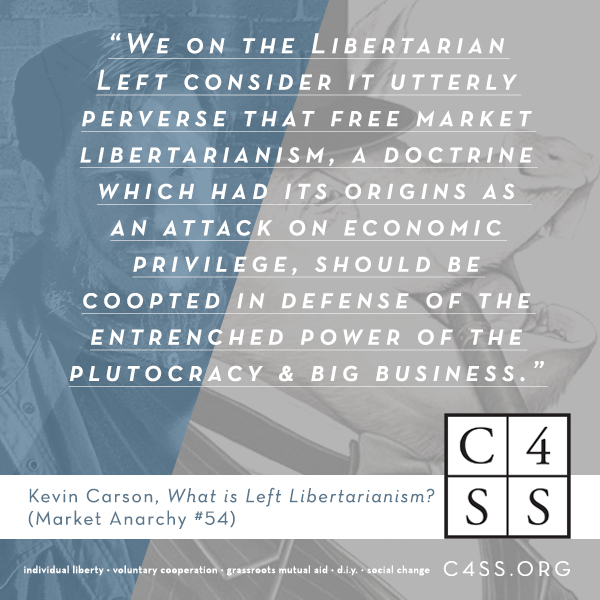 … We on the Libertarian Left consider it utterly perverse that free market libertarianism, a doctrine which had its origins as an attack on the economic privilege of landlords and merchants, should ever have been coopted in defense of the entrenched power of the plutocracy and big business. The use of the “free market” as a legitimizing ideology for triumphant corporate capitalism, and the growth of a community of “libertarian” propagandists, is as much a perversion of free market principles as Stalinist regimes’ cooptation of rhetoric and symbols from the historic socialist movement was a perversion of the working class movement.

The industrial capitalist system that the libertarian mainstream has been defending since the mid-19th century has never even remotely approximated a free market. Capitalism, as the historic system that emerged in early modern times, is in many ways a direct outgrowth of the bastard feudalism of the late Middle Ages. It was founded on the dissolution of the open fields, enclosure of the commons and other massive expropriations of the peasantry. In Britain not only was the rural population transformed into a propertyless proletariat and driven into wage labor, but its freedom of association and movement were criminalized by a draconian police state for the first two decades of the 19th century. …

— Kevin Carson, What is Left-Libertarianism?