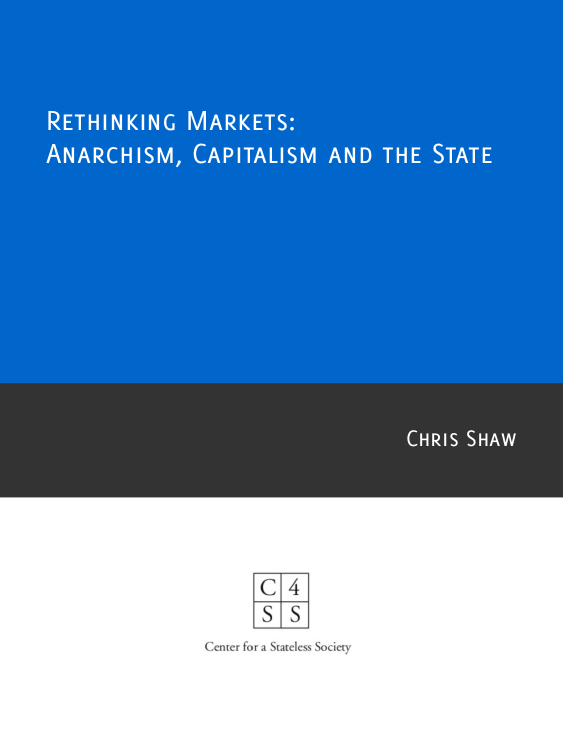 Markets are generally conceived as the bulwark of capitalism, greasing the wheels of capital accumulation and mobilisation and creating the class relations characteristic of modern capitalism. It creates winners and losers, and displaces workers and firm owners through the mechanisms of creative destruction and competition. This re-circulates ownership into increasingly fewer hands, placing the winners at the top as the owners of the means of production and capital and the losers as wage labourers or the lumpenproletariat, open to exploitation and domination.

This picture ignores the potential of markets. Markets need not be structures of organisation bound in capitalism or statism, but rather systems that can be shaped and determined by those within them, voluntarily controlled and distributed. In other words, bound in the collectivities and heterogeneities of an anarchist social order. By anarchism, I mean “a definite trend in the historic development of mankind, which, in contrast with the intellectual guardianship of all clerical and governmental institutions, strives for the free unhindered unfolding of all the individual and social forces in life”.

From this, I see markets as simply one example of an anarchist setting, allowing for free, equal actors to determine outcomes and achieve goals and values. But this definition inherently removes markets from the bounds of the state and capitalism. Both prompt their understandings as relative to that of the governmental and clerical respectively. The institution of the state encompasses the realm of law and order, the monopoly on violence, from which the institution of private property and the power relations of capitalism are maintained. Capitalism, as that of the clerical, creates consciences, pathologies and ideologies that allow for the maintenance of capitalist organisation . The two together comprise the modern socio-economic structure.

These clerical and governmental forces that wield vast amounts of power are a recent phenomenon. From my analysis, I hope to see some of the pathways which can change this system, moving from exploitation toward a system of voluntary collaboration and an economy embedded in the realm of the social. One that is heterogeneous and decentralised. As Paul Mason states, “It is entirely possible to build the elements of the new system molecularly within the old. In the cooperatives, the credit unions, the peer-networks, the unmanaged enterprises and the parallel, subcultural economies, these elements already exist”.